A special day here at the Goof home. My son loves baseball, but rarely gets to see a game (games start around 8 and he needs to be in bed around that time.) But he came home from camp and took a nap so he could stay up late.

Normally he has to wait for the morning papers - which he obsesses over, clips, and marks up. For the rest of the world print newspapers are slowly dying out for everyone else - but I am raising my son in a different era. He will be like the last of the Mohicans.

They did a great program with old Hall of Famers. I tried to explain to my son how Ralph Kiner was a real old-time - long retired when I was a collecting baseball cards. Of course they had my hero Eddie Murray and other Oriole greats - Franks and Brooks Robinson, Jim Palmer and of course Cal Ripken. I was also happy to see Robin Yount, who's name adorns my boyhood glove, that I still use.

Best of all was Yogi Berra - my son knows all about Yogi. How, after Mary Lindsay (wife of NYC Mayor John Lindsay), told Yogi he looked nice and cool, Yogi responded, "You don't look so hot yourself." 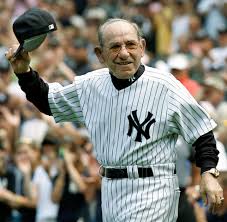 How after Yogi was hit by a foul ball, he was taken to the hospital where doctors X-rayed his head and found nothing.

As I write this, it is the fifth inning. I asked my son if he wanted to stay up and watch it. He said, "Dad - I never refuse a fifth."

Yep, I'm raising my son for a career in vaudeville. Or maybe he can work the Catskills.
Posted by Father Goof at 9:52 PM No comments: Links to this post

John Henry vs. The Bicycle

In one of the many statistics courses I've had to take (and muddle through) we learned about the John Henry Effect:

One group may view that it is competition with the other group and may work harder than than they would under normal circumstances. This generally is applied to the control group "taking on" the treatment group.

The effect is named for the classic American folk hero about a mighty steel-driver on the crews that built the railroads across the country. One day, the owner of the railroad buys a steam-powered hammer to do the job and John Henry challenges the machine in order to save jobs of his work-crew. In a tough mano a machino contest John Henry bests the machine but dies in the process.

I had my own little John Henry effect. My son has begun riding a bike. We go out to the trail, he bikes and I run along-side him. He is only seven, his bike still has training wheels, but he still peddles faster then I run. I am inspired, this is man against machine. I push myself to new limits. My heart pounds, my legs strain, my breath is ragged. It is MAN vs. MACHINE! AGE vs. YOUTH! I run like the wind (or at least a gentle breeze.)

And today, in defense of honor - I kept my son in sight for 87 seconds.

Strictly speaking, this may not be an illustration of the John Henry Effect, or it might be...

The fact is I didn't do very well in the class, which is why I volunteered to sing John Henry, Steel Driving Man in class for extra credit.

Yes it was kind of embarrassing, but it was also good preparation for my thesis defense (currently projected for 2017.)
Posted by Father Goof at 8:28 PM 1 comment: Links to this post

The first half of summer is full of celebrations at the Goof home. Father's Day, Fourth of July, my birthday (on the one hand a reminder of my spiral towards decrepitude and death - but also an excuse to loaf and have a drink with lunch), and another one, ummm, yeah...

We were married on Father's Day, so when it comes it should be a bit of a head's up to yours truly. This year on our anniversary, as we went through our morning stumbles, my wife asked me, "What day were we married?"

It wasn't a trick, we were both so tired and overwhelmed that we just forgot. Still, I felt bad. At work I asked all of the women I worked with if they had any jewelry they could spare? They were not sympathetic.

I did convince an intern to take on an emergency baby-sitting job so I could take the long-suffering Mama Goof out. One of my big problems with baby-sitters is that they are one of the only elements of the economy that still require cash (along with vending machines.) Why can't today's web savvy baby-sitting teens get Paypal accounts? At $12 an hour, the extra 20 minutes to get to the ATM to pay them is a defacto surcharge.

Here, I was saved by mamawla. I still had the wad of bills she had foisted on me for Father's Day - and could pay off the baby-sitter.

No hard feelings, because on my birthday I got the best present - exactly what I wanted. It was a weekday, but I got to sleep in (until 8) and my wife took on my major morning chore. She applied the sunscreen.

I've written before about all of the tiny factors that make parenthood much harder today than it was in the past. One is lunches, which absorbs my wife's energies every morning. Our kids don't have food allergies, but their classmates seem to have a full spectrum of vulnerabilities that need to be navigated.

I take on the other great enemy of health - the sun. Every morning the kids fight me on the sunscreen issue. I can't just hold them down, because the sunscreen makes them all slippery. Plus, in chasing them around I get sunscreen all over the house (I don't corner as well as I used to.) So I threaten, cajole, and beg. All this without coffee (which I invariable manage to flavor with sunscreen.)

When my mom called to wish me a happy birthday, I asked her if she had to chase me around the house to put on sunscreen? She laughed, "Only at the beach. For a regular day at camp, there was no need."

She reminded me that when she was young sunscreen didn't exist, people put on oil and just sat in the sun like rotisserie chickens. She was a product of her times. Simpler, easier times...
Posted by Father Goof at 6:05 PM 1 comment: Links to this post

This morning, as we woke up, my wife looked at me oddly.

"Sounds like a nightmare. I'm sorry, are you okay?" I tried to be sensitive.

"We went to bed early. They gave us food. They made everyone be quiet all the time. There was a toilet right in middle of my cell," she murmured, then she looked at me and beamed, "It was wonderful!"

"Even the toilet with no privacy?" I asked as she got up to go to the bathroom.

Before she answered, my daughter zoomed into our bedroom and began banging on the bathroom door, "Mommy, mommy! I need to come in."

I tried to distract my daughter, apparently she "needed" a band-aid. When I asked her to show me the wound, she couldn't - because of course she didn't have one. She is at the age where band-aids are really accessories. Her brother had come in and on hearing his sister wanted a band-aid helpfully offered to hit her so she would need a one. For a seven year old, that's a win-win.

I shooed away my son, got a piece of masking tape and drew Scooby-Doo on it. After four tries my daughter was satisfied.

When my wife came out of the bathroom she had a bemused expression. "The prison toilet was the best part. I didn't mind if they watched me - just so long as they were quiet."

I await signs of her impending crime spree. I fear that she will start a new trend that our criminal justice system is not equipped to handle.
Posted by Father Goof at 8:38 PM No comments: Links to this post 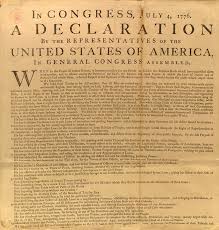 Pyrotechnics are nice, but I try to teach my kids something about the meaning of our national holidays. So, over and over again I recite to my kids these beautiful lines from the Declaration of Independence:

We hold these truths to be self-evident, that all men are created equal, that they are endowed by their Creator with certain unalienable Rights, that among these are Life, Liberty and the purfuit of Happineff.

Cheap joke at the expense of our Founding Fathers? Maybe, but they can take it. And in making my son laugh a bit about it, he also remembers these profound words about a government that, by design, seeks to help its people live a decent life. Imagine that - a country that in its central founding document wants its citizens to at least have a fair shot at not merely survival - but happiness.
Posted by Father Goof at 7:03 PM No comments: Links to this post

My kids and I have had a lot of big wrestling sessions lately. It might be the early sunrise. Sunlight causes them to get up and come into our bedroom and yell. Sunlight makes plants grow, water evaporate, and children get out of bed in order to shout at their parents.

Since I am not similarly effected by sunlight, I prefer to stay in bed quietly moaning and cursing Apollo. So my kids jump on me. This is better than getting up, they aren't that big. So we wrestle. My favorite tactic is when my son has me "pinned" to get his little sister to climb on top of him. Technically she is on his side, adding her weight to his to dominate me. Then I pick her up and drop her on him. Effectively, I use my daughter, to batter my son. (There are lots of blankets so no one is really getting hurt. And the combat is purely physical - if this were psychological someone might get hurt.)

So as I drift in and out of sleep, occasionally waving my arms to brush off little combatants - my mind drifts and I start to think of my daughter as Italy in World War II. That is, the British determined they were happier to have Italy as an enemy - weighing down the Germans.

Then I wondered why I so readily associated wrestling with international affairs. Then I remembered that my introduction to wrestling came in the era of The Iron Sheikh and Nikolai Volkoff who teamed up as "The Foreign Legion." Volkoff sang the Russian National Anthem before bouts. This was the 1980s, the symbolism (as with everything else in the world of Vince McMahon) was ummm... unsubtle.

I doze again, thinking "The Influence of Professional Wrestling, American Public Opinion, & Foreign Policy" might be a good PhD thesis. It might explain a lot. It would be way more fun to research than anything else.

Then I awoke with a start, the Axis powers were attempting an assault on a peripheral position by head butting my legs.
Posted by Father Goof at 10:24 PM No comments: Links to this post