As an honorary soccer mom (I am a dad, of course, but I drive most of the carpools) I found Mass. Governor Duval Patrick's speech particularly compelling. He spoke of growing up on the South Side of Chicago where neighbors looked out for each other worked together to enforce shared values. He said, I paraphrase:

Are the Democrats in favor of beating other people's children?

As a regular carpool driver this is a policy initiative I can support. Carpool driving is maddening, because you can discipline your own kid - but you have zero leverage over the other kids in the carpool. The other kids know this and will abuse this power vacuum mercilessly. It is an open question whether the Democrats are sufficiently realistic about international relations - but clearly they understand balance of power arrangements in the carpool.

Best of all, being Democrats, not only will they support disciplining other people's children - they'll probably subsidize it.
Posted by Father Goof at 4:35 PM 1 comment: Links to this post

Michelle Obama says she wakes up every morning and her first thoughts are of her children. I am unimpressed. The defining feature of parenthood is waking up every morning to children screaming.

On the rare occasions when I do not wake up to the sounds of children screaming - they are still first in my thoughts. This is because silence can mean only one thing, they are quietly coming closer to harpoon me with a tinker-toy spear.
Posted by Father Goof at 10:55 PM No comments: Links to this post 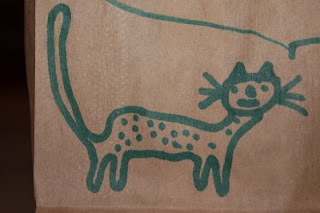 Clearly I am continuing to be deeply affected by the news that a big cat is loose in our area. The media coverage may have subsided, but for me the terror continues. Look at what I've been drawing on my daughter's lunch bags. This first one, no big deal. 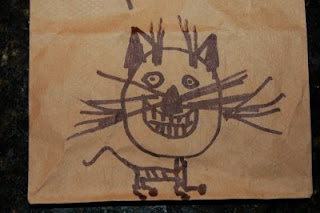 But when my daughter saw this, she screamed and ran away. As an artist I guess I should be flattered that my work actually moved someone. My wife had to reduce the fear factor with a few quick strokes of the felt tip.

Initially this cat was a cougar. It has since been downgraded to a Savannah Cat. Although the Savannah Cat is only one third the size of a cougar - - it is three times as evil and it remains on the loose.
Posted by Father Goof at 10:29 AM No comments: Links to this post

Email ThisBlogThis!Share to TwitterShare to FacebookShare to Pinterest
Labels: animals/pets

So everyone is blown away by Michael Phelps. But what is with the super-low swimsuit - everyone else makes do with the full-body version. Is he planning a post-swimming career in plumbing (so he can stay around the water)? Or does the hint of tush cleavage act as a spoiler?
Posted by Father Goof at 9:33 PM No comments: Links to this post

Yesterday was Tisha B'Av, the saddest day of the Jewish year. It is a day of mourning for the many historical tragedies that have befallen the Jewish people (amazing they could fit it all into one day!)

Traditional Jews fast from sundown the evening before through to nightfall, about 25 hours. Knowing that not eating for more than an hour or so makes me cranky I arranged playdates for my children.

My daughter and her friend played a few rounds of "beauty salon" in which they used magic markers to paint their toenails. Then they decided to play "restaurant."

Since I was nearby, lying on the couch drooling slightly (I had been fasting for 20 hours), I got to be the customer. They served me dish after dish, a salad made from wooden cucumbers and carrots, a bristle block sandwich, and some plastic cookies.

It looked good enough to eat.
Posted by Father Goof at 9:47 PM No comments: Links to this post

Clash of the Gordons

I was poking around the Web today, looking for the lyrics of a song I could teach my kids and have them serenade my wife when she returned from her trip. At first I was thinking of The Wreck of the Edmund Fitzgerald.

But in the process, I learned something that really bugged me - Gordon Lightfoot isn't bald.*

The two celebrity Gordons I know of (and for some reason, I don't have any actual friends named Gordon) are both cueballs, so in my universe, people named Gordon should be bald.

One of the Gordons is of course, Gordon of Sesame Street. 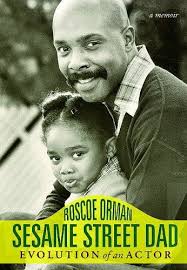 The other is G. Gordon Liddy.

Both burst on the national scene at about the same time - in 1974, when I was a little boy. Gordon joined Sesame Street and Liddy played a crucial role in destroying our nation's innocence by engineering the Watergate break-in. Thus good Gordon and evil Gordon - at least in my mind's eye.

Liddy of course plays into the stereotype of bald men as evil masterminds. (Any chance of getting references to Lex Luther banned as "hate speech?")

It is a stereotype that oppresses me regularly as I join their ranks (at a rate increasing daily...) Fortunately, Gordon of Sesame Street was a shining counter-example, a mastermind, but for good. So good was Gordon, that there is a Gordon Fisher Price person. It is safe to say that there will probably never be a G. Gordon Liddy Fisher Price person (if you really want one, just bite the plastic hair part off of any other Fisher-Price character - the Fisher-Price figures can't resist, they have no arms.) Come to think of it, a Watergate-themed Fisher-Price set would be kind of cool and might be an important step to addressing the shocking deficit of civic knowledge among America's youth.


*I knew "The Wreck of the Edmund Fitzgerald" was really long and dirge-like - just the ironic mood I was seeking. Of course when I discovered it was the tragic story of an iron ore ship freighter that sunk in a November storm on Lake Superior (killing its 29 crewmen), I decided it would be kind of inappropriate.


I should establish something here. I never really listened to music. When all the other kids in high school were watching MTV or listening to tapes on the Walkmen - I was doing "something else." I am at a loss to describe what it might have been. So my knowledge of music and familiarity with songs and musicians is idiosyncratic - with an emphasis on the idiot. I am particularly prone to songs that when heard for even a few bars get stuck permanently inside the skull and also commercial jingles. I am also incapable of understanding lyrics clearly.

I hope this clarifies something...
Posted by Father Goof at 7:32 PM No comments: Links to this post

Eloquence in the Morning

My long-suffering wife is away for a few days. No problem - I've got that dad thing down. But, in the mornings it is my wife who is the "go to" parent.

So, as usual, my little girl came into our room at an ungodly hour (although in fairness I consider any AM hour with a single digit ungodly) and commanded, "Get me my milk, please."

What coffee is to adults, apparently milk is too children.

I rolled over, looked at her and said wryly, "No, you get me my milk."

She furrowed her brow, "No, I'm little!"

An argument that had the virtues of brevity, elegance, and absolutely truth, I thought as I stumbled downstairs to heat her milk.

Having mastered the classic trivium (logic, grammer, and rhetoric) now she needs to learn to count so she can take on the quadrivium.
Posted by Father Goof at 3:02 PM No comments: Links to this post

Email ThisBlogThis!Share to TwitterShare to FacebookShare to Pinterest
Labels: daughters

My wife looked concerned, "We need to pull him out - I don't like this."

"Yeah, I hated color war when I went to camp, I was always the one dragging down my crew," I shared - dredging up long repressed memories of summer initiations.

My wife's eyes got wide, "You are in this? Why didn't you tell me? You could have endangered all of us!"

Then I remembered, my wife grew up in Los Angeles - and not as a member of the "summer camp attending" class (although summer camp in LA seems redundant.) In her mind, color wars implied something beyond three-legged races and pop-tart eating contests.
Posted by Father Goof at 1:13 PM No comments: Links to this post