Plus, I get to practice my Spanish yelling, "Tumbalo! Tumbalo!"

Wagering however, is still frowned upon.
Posted by Father Goof at 7:44 PM No comments: Links to this post

Getting old beats the alternative, but it still bites.

I had to come to terms fairly early with the reality that I was older than most successful athletes. Now I know, with absolute certainty, that I will never get the call to the big leagues. Of course, I had a pretty good idea that wouldn't happen by the age of nine - so it didn't eat me alive.

In entertainment, middle-aged men can still be big stars (Hugh Jackman is older than me) - although here too, the that call was always unlikely. 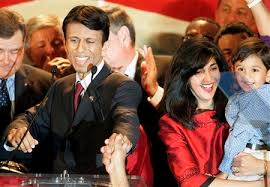 But last night Louisiana's boy genius governor Bobby Jindal made his national debut, giving the Republican response to the State of the Nation. It is at least reasonably likely that he will be President one day, making him the first President younger than me. Since Presidents tend to be in their fifties, I was hoping to put this moment off until I was in my sixties - at which point age and wisdom (or at least in my case senility) dulled the cuts of time's cruel blade.

Looking up Mr. Jindal, it turns out he also, on the side, has become a multi-millionaire. Salt in the wound...

I think of Shakespeare's words in Richard the Second:

I wasted time
and now doth time waste me

Of course, maybe if I stopped mumbling Shakespeare to myself and did a bit of work... I still wouldn't be delivering the rebuttal to the State of the Union.
Posted by Father Goof at 6:40 AM No comments: Links to this post

Seven is proving to be a great age. He can read and amuse himself. While still energetic, my son is more or less governed by his brain. The deathwish that possesses small children to stick their tongues in electric sockets, drink lye, and try to climb into the toilet has begun to dissipate. He still can be stubborn. He can still be madly emotional, but while the causes are often trivial, they are at least rational. The other day he was disconsolate, having lost a burping contest during recess. His mother, while initially nurturing, walked away when she learned the cause. As a good father I took him aside, talked to him gently, and listened to him burp.

“Son,” I told him, “You are burping from the throat. No resonance and you wear out your larynx. Bring the air down deep into your diaphragm. You can sound out whole words.”

But, best of all, he can get fairly sophisticated humor and even make clever jokes. As a one-time comic wannabe, this is heaven. For example, in the wake of the inauguration he asked me about the vice president. I reiterated McCain’s joke that the vice president’s main job is to call the president and see if he is still alive. I added that the Veep goes to meetings and events when the President doesn’t want to. I began riffing, like the second coming of Bob Newhart, holding my hand with an extended thumb and pinky like a phone:

”Hey, Vice President, this is the President. Yes, yes, I’m happy to be talking to you too. So listen, I have a really important job for you. No, it isn’t another toxic cleanup site in New Jersey. This has international implications. The President of Zambeziland died and I need you to go give a speech at the funeral in Africa. It should be a three-day traditional ceremony. You’ll need to stay for the whole thing – if we offend them they might cut off vanilla exports and we need the vanilla vote. Wear a nice dark heavy suit. What’s the weather like? Well it’s near the equator, probably no more than a 120 at noon.”

You know who has it worse then the Vice President? Lieutenant Governors, they are like Vice Presidents – but just for states. They really have nothing to do.

“Hi Governor, it’s me… you know, your Lt. Governor? How are you feeling today, good? Not under the weather or anything? Be careful, you know, going up and down stairs – most accidents happen around the house…

What’s that, you are giving a speech out of state this afternoon? Really, so you’ll be out of state for a couple of hours? Sure, knock’em dead Governor!”

“I’ll be governor for three hours! What will I do first? Change the state reptile? I’ll build a stadium with my name on it. I’ll start a new education program. I know, I’ll declare a state of emergency quarantine and seal the borders. Then, I’ll be governor FOREVER! And then, I can sponsor midnight basketball”

My son dies with this stuff and for some strange reason, referring to midnight basketball, absolutely cracks my kids up. My son does the bit pretty well, and even my daughter tries to imitate it. Her timing and attitude were pretty good, but most of the words didn’t come out right (it was like listening to a comedian performing in Hungarian.) But her big punchline was, “And I’ll make midnight sports!”

Why this old political football from the budget battles of the 1990s (a decade before my kids were born) is a mystery to me. I don’t know why I mentioned it or why it works on this audience. It is a weird comedy synergy – but, as Woody Allen counsels, “If it bends it’ss comedy, if it breaks…”
Posted by Father Goof at 11:25 PM No comments: Links to this post

Yours truly is visiting the in-laws in The City of Angels. But my enjoyment of this beautiful place is a bit off, as I have acquired a black eye.

In the shower at the hotel, I was trying to squeeze conditioner out of the little hotel bottle. I applied too much pressure and the slippery container left my hands at an astounding velocity and impacted my eye.

A new wrinkle to getting soap in your eye. It doesn't look clean at all.

The little Goofs considered this poetic justice from all of the times I got soap in their eyes when washing their hair.
Posted by Father Goof at 2:53 PM No comments: Links to this post

Post-Potty Training: There Will Be Poop

Goofgirl has been potty-trained for some time. But she hadn't mastered wiping - or perhaps she didn't want to. Perhaps she enjoyed interrupting whatever I was doing (usually eating dinner) to yell, a la Daniel Day-Lewis in There Will Be Blood, "I'm finished!"

If I did not go to the little princess immediately she would come to me, pants down, bearing toilet paper, and possibly dribbling poop across our house. Since her digestive output cycle seems to coincide with my dinner, it was doubly important that I attend to her needs. Nothing eliminates the savor of a meal like cleaning up poop.

And so, night after night, as my wife giggled at me, I would put down my fork and knife, excuse myself and go to face the unblinking eye of Sauron.

But those dark days are coming to an end. She is proudly mastering this aspect of personal hygiene. Tonight, as we were eating she took care of business and proudly announced, "I wiped myself!"

My daughter and I high-fived. Then my wife asked, "Did you wash your hands?"

"Oops!" my daughter yelled as she scampered back to the bathroom, and I followed.
Posted by Father Goof at 10:19 PM No comments: Links to this post

Why the Cards Must Win!

As I’ve mentioned before, my son gets pretty emotional about sporting events. He has decided he hates the Steelers (because they beat his beloved Ravens). He is watching the Superbowl as we speak. (I am being a good daddy and keeping my daughter company as she watches The Lion, The Witch, and The Wardrobe - she identifies with the White Witch.)

If the Cardinals do not come back, I fear his wrath. Some recent incidents are worrisome. Reading Harry Potter we came to the scene of the world quidditch championship (it is a game the wizards play, on broomsticks). My son decided he wanted Bulgaria to win and PLOT SPOILER ALERT when they didn’t he was despondent. He was upset that his randomly chosen team in a non-existent game, that occurred in a work of fiction, so that the results were already set, didn’t win! This is beyond obsessive.

Worse, we spent the afternoon watching Animal Planet’s PuppyBowl. He was rooting for the beagle and furious that the ref kept giving passes to the oversized Aussie sheepdog.

But the absolute worst part is that when he bursts into tears and is inconsolable, it is everything my wife and I can do to keep from laughing.

Anyway - sorry Pittsburgh fans, this isn't personal - but "Go Cards! Please!"
Posted by Father Goof at 8:31 PM No comments: Links to this post