Mama Goof remembers well the day she introduced me to high-octane coffee. She had grown up drinking coffee and gone to graduate school in Seattle. Starbucks was only just becoming a national phenomenon so she took me.

My previous forays into coffee drinking had been desultory, I was unimpressed by the bitter beverage and my school’s cafeteria had fountain soda so I indulged my childhood fantasies and drank Coke with breakfast. Also, I can admit this now; I was intimidated by the Starbucks menu.

My future wife carefully and patiently explained the choices to me. She got a little frustrated when I kept refusing a latte because, “I didn’t’ want a lot of coffee.” My inability to grasp the differences between a macchiato and a cappuccino were tiresome (particularly since she knew how fulsome I could be in discussing the differences between porter and stout or IPA and bitter.)

Finally, using the same intuition that has served her so well as a mother, she figured out the real problem. I was afraid of coffee, based on my previous experience with cheap canned gruel that tasted like motor oil. She made me promise to try whatever she ordered, and then introduced me to the caramel latte.

From a taxonomic perspective the caramel latte is not properly classified as a species of coffee, but rather in the “ice cream shake” family. I sucked it down, very fast.

Then, something remarkable happened. My eyes grew large and I ran! We were close to Copley Plaza, an upscale mall in downtown Boston. I ran from store to store, picking up objects and relaying observations about them at the speed of an auctioneer on full throttle:

I ran into a Crate & Barrel and couldn’t find my way out. The not yet Mama Goof made no effort to direct me out since it was easier to contain me if I stayed in one store. So I sat on every piece of furniture (including dressers, desks, tables, cabinets, and coat racks.) All the while delivering a monologue about the impact of industrialization on the aesthetic experience of the American bourgeoisie.

I thought I was incredibly amusing. But when Mama Goof heard the store clerks mention calling security, she directed me back out. I raced in and out of other stores. Oddly, the bookstore (usually my favorite) was uninspiring – I could stand still long enough to read titles. I pulled Mama Goof to the movie theater, where I had worked in college. It was a weekday afternoon, and an old friend was working door and let me in. Movies were awesome, but I couldn’t sit still. When the projectionist refused to speed up the film, I raced from theater to theater, watching a dozen movies at once. The staff didn’t mind my peripatetic movie viewing, but they kept asking me what I was “on,” and where they could get some.

Fast Forward to the Future
Fifteen years later, sliding into middle age – nothing has changed.

Serious doses of caffeine still make me crazy. I’ve actually had my children yell at me to calm down when I am in a coffee-fugue.

But I’ve also gotten in the habit. Kids and life make proper sleep hours difficult, so coffee is the fuel of the over-tired. Without it, I am sleepy. With it, I am crazy - a challenge on a par with Scylla and Charybdis. 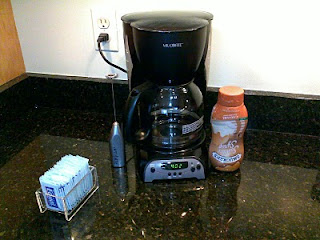 I’ve tried to switch to decaf, but it has no oomph. I’ve tried tea, but the effects are about the same. I’ve tried decaf-caf mixes. There is no Golden Mean for caffeine.

Every morning I wrestle with this challenge, trying to calculate - 50% caf morning or tea or full-strength. The coffee maker sits on the counter, confident, its percolating almost sounding like Darth Vader saying, “You don't know the power of the dark side!"
Posted by Father Goof at 4:30 PM

Curious. I don't care for coffee personally (And I feel the same way about beer, which my mother used to describe as goyishe and I thus never developed much of a taste for - actually, I just don't like it, tastes like moldy bread to me) but I am very sensitive to caffeine and get the same effect you describe from some of the stronger teas (not that wimpy American stuff, which is, anyway, completely tasteless- Russian or Chinese tea,which caffeinewise can give coffee a run for its money).
I did recently read ian intereting article which cites a studty that most people who drink coffee inthe morning actually don't need caffeine for the pick-me-up - they're just dehydrated and would get the same effect from water (I suspect that would be *after* one gets oneself unaddicted and survive the three days of headache)

I know the your Russian tea - it could definitely spark a revolution or make a writer manic enough to turn a novella into a 1200 page novel.

I don't know about the hydration issues - I drink tons of water and still need the kick. But too much and I over-charge and act like a five year old.

I don't care for coffee - but mixed with caramel it is pretty tasty.