Belated Memorial Day Thoughts: Freedom & the Fiddler on the Roof

I hope it isn't too late to post about Memorial Day. It was a big Jewish holiday this weekend so I couldn't post, but Memorial Day is a special day and I try to honor it with more the just hamburgers and taking advantage of low low prices on mattresses. Sometimes there is a trip to somewhere special, other times it is an extemporaneous lecture on liberty and the Constitution.

A few years ago I took GoofBoy to an elementary school production of Fiddler on the Roof. (This wasn't on Memorial Day, but it is in the spirit of it - just keep reading.)  The play had all of the virtues of that genre of production. GoofBoy walked out humming the tune "Tradition."

"You liked it buddy?" I asked. 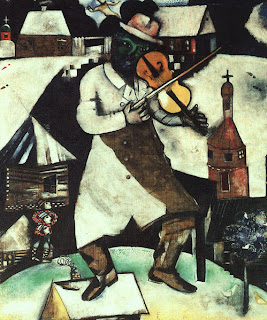 "Yeah, but one thing bothers me. Where was the fiddler? The play is called "Fiddler on the Roof" but there isn't one."

GoofBoy believes in truth in advertising, he gets that from his mother.

"It is a metaphor, the fiddler on the roof is ridiculous and could fall at any moment but he is up there anyway. But isn't that kind of how life is?"

GoofBoy nodded.  "Now, I have a question for you.  Did you like the play, did it make it seem nice to live in the shtetl?"

"Well it wasn't! It was poor and dirty and dangerous.  I've told you this before, be grateful every day of your life that your great-great grandparents - who I never even met - got their tuchases out of Russia and came to America!  They went from the worst place in the world to best!"

I'm on a roll now, and nothing will stop me.

"Remember in the play, the blessing for the czar?  May hashem bless the czar and keep the czar far away from us! In America it is the opposite.  When America first started there were only a few Jews and they wrote a letter to George Washington asking if America would treat the Jews fairly.  George Washington wrote back to them..."

I am yelling, choking up, and reciting from memory all at once - I don't wait for GoofBoy to answer.

"For happily the Government of the United States, which gives to bigotry no sanction, to persecution no assistance, requires only that they who live under its protection, should demean themselves as good citizens."

"And then to finish up, just to show he really meant it, he quoted the Prophet Micah and wrote: May the Children of the Stock of Abraham, who dwell in this land, continue to merit and enjoy the good will of the other Inhabitants; while every one shall sit under his own vine and fig tree, and there shall be none to make him afraid."

"Buddy, I won't tell you America is a perfect country - it isn't.  I'm happy to tell you all about mistakes it has made.  But it is an awfully good country, be grateful for it."

"So, life is hard and unpredictable no matter where you live.  We are all Fiddlers on the Roof.  But at least in America - not everyone is trying to knock us over all the time just for being Jewish."

I believe firmly in bringing things around full circle.

"Dad," GoofBoy looked up, "Are you going to turn every single question I ever ask into a history lecture?"