Celebrating Two Nations at the Sailabration

The Goofs went to the Sailabration - the big party in Baltimore's Inner Harbor celebrating two hundred years since the War of 1812.  (The real action in Baltimore actually took place in 1814, so we expect to be back.) 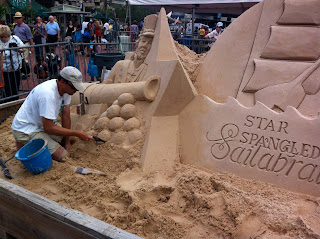 There were crowds and all kinds of activities.  There were the Blue Angels flying overhead.  And there were ships, lots and lots of ships.  Big ships and little ships, sailing ships, modern warships, and working boats.  I love ships and was in heaven, running onto ship after ship.  The little Goofs, got tired and lost interest pretty quick (you can get a glimpse at some of their doings on my Twitter and Facebook feeds).  GoofGirl did get pretty comfortable in the captain's chair of a Canadian warship.  But they were even underwhelmed by the Blue Angels roaring around overhead.  I briefly considered getting new kids.  In fairness, the Blue Angels are kind of hard to follow.  By the time you hear the roar of the jets, they are already gone - which is disconcerting. 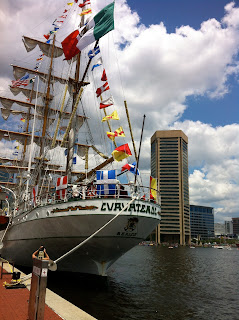 Knowing that the little Goofs' endurance might not be great, I insisted that our first visit be to the Buque Escuela ARM Cuauhtemoc.  A beautiful ship, it serves as a training vessel and ambassador of goodwill for the Mexican Navy.

Abuela, the late and beloved grandmother of the little Goofs (I'll write about that some other time), was born in Guadalajara, Mexico.  Mama Goof has been wonderful in embracing my background and beliefs and the lives of the little Goofs are infused with them.  But I do not want to neglect their mother's heritage - and we owe this rich inheritance a lot more then frequent trips to Baja Fresh for quesadillas (not that we don't love them!)

As a Mexican naval vessel, the Cuauhtemoc is sovereign Mexican territory and so, in a small way, on a day they celebrated the country of their birth, the little Goofs had a little visit to the land of their ancestors.