The Miracle of Sibling Affection 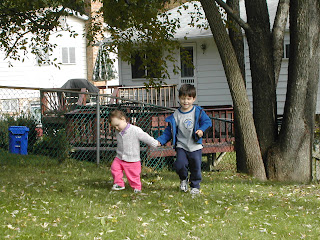 One thing about parenthood that startles me is that my children seem to really like one another.  This morning, they played together.  They had just spent two days together with the GrandGoofs, so I figured they would be sick of each other.  But they reported that Bubbe and Pop kept them so busy they didn't really have any time together.  Every once in a while, they actually insist on a playdate with each other.

GoofGirl and I have had a number of adventures recently, and last week when I proposed another she asked urgnetly, "Can my brother come?"

I won't say they always get along perfectly, of course they squabble.  But even their squabbles are remarkable.  Driving the other day they were snapping at each other and I yelled at them to stop it.  GoofGirl yelled back at me, "Dad - let us work it out!"

Fair enough, it just isn't how I remember things.  My brother and I fought every day we were in one another's presence until he turned 15 and was suddenly very strong.  I was an almost completely terrible big brother.  I did not like this other person in my house.

At my brother's bris (the ritual circumcision performed eight days after a male child is born) I had to be sent to my room because I was telling everyone in attendance, "You know, he is ruining my life!"

I was not quite four years old.

It went downhill from there.

At one point BubbeGoof, exhausted with our fighting, yelled, "You two fight like Cain and Abel!"

"Huh?" we said, looking up as from trying to smash each others face into the linoleum tiled kitchen floor.

So BubbeGoof read us the story of Cain and Abel.  But with one glitch.  She meant to read, "And Cain set upon his brother."

But it came out differently, she read, "And Cain sat upon his brother."

And so I followed the example of Cain, repeatedly.

My wife remembers the first time she met my brother the family dinner devolved into my brother and I throwing Sweet & Lo packets at each other and then head-butting each other up and down the stairs. I was well into my twenties...

I thought that was how brothers were, that this was human nature.  Years later, when I read Thomas Hobbes (the "life is nasty, brutish and short" guy) it made perfect sense.  But the little Goofs show that human nature is not only brutal.

In retrospect, maybe it was just me.
Posted by Father Goof at 11:12 PM