Making it at the National Makers Faire

Since the Goofs are little makers, and the last day of school was only a half day, I took them to the National Maker Faire (Friday, June 12). I can’t say we had any idea of what to expect. Usually my adventures go pretty well - but I’ve had duds. I was upfront - you guys get to decide. If it stinks, we can leave. This placated them, since all they wanted to do was watch TV. (They go away to camp for four weeks about a week after school and will not see any TV - so the week between school and sleep-away camp is a sort of anything goes.)

I needn’t have worried. 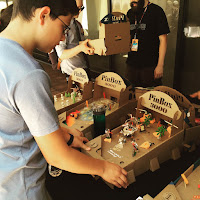 The National Maker Faire is an event intended to showcase invention and tinkering. Held at the University of the District of Columbia, it sprawled across the campus. As soon as we got there we encountered the Pinbox 3000 from the Cardboard Teck Instantute who make pinball machines from recycled cardboard. With a little doing, one can make their own and equip it as they wish. The Goofs have encountered pinball before, but were ready to play all afternoon. They both play lots of video games, but there is something deeply satisfying playing a game where you manipulate actual objects in physical space. It is a crucial additional dimension. (I think that is part of the charm of paper books vs. eBooks.)

However, I urged them on. 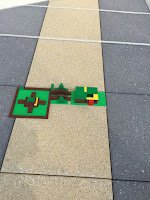 One of the highlights was the enormous Lego display. One of the wonderful things about our time is that girls play with Legos. They always could of course, but don’t recall them being terribly interested (in fairness, girls weren’t that interested in yours truly so how would I have known?) But now, there are Lego sets oriented to girls and - more importantly - girls who simply don’t see Legos as “something for boys.” 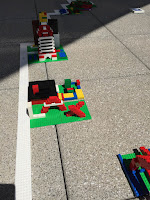 The Lego section at the National Makers Faire was enormous. The United States was outlined in tape and children were encouraged to build things and place them where they belong in the U.S. They hope was at the end of the fair that the U.S. would be full. GoofGirl did her part, building pueblo for New Mexico, LAX for Los Angeles, and the camp where she is heading next week.

GoofBoy and I wandered around. There were lots of tchotchkes and toys (and what's wrong with that, fun is important!) But there is also a lot of serious stuff. All this making is important and can change lives. The vastly increased availability of small-scale manufacturing technology like 3-D printers means it is that much easier to build highly specialized equipment to solve all kinds of problems. We learned about NASA’s contest to develop a habitat on Mars, how NIST measures the effectiveness of sophisticated equipment, and how kids in Baltimore are using 3D printers to make inexpensive prosthetics. Pretty cool. 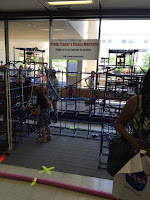 When we finally dragged GoofGirl away from the Legos we saw the wonderful chaos machine (which had the extra virtue of being indoors). We had to pass by about a million exhibits to beat traffic, but there was a wealth of great terrific stuff to see. GREAT THINGS ARE HAPPENING! I'm just scratching the surface - you can see a list of exhibitors here.

Better, come by next year - we will!