Fey Troubles: Must See TV vs. My Marriage

It has been a long time since I’ve needed to hide magazines from the women in my life. But then Vanity Fair put Tina Fey on the cover, but worse - every Thursday night she tests my marriage.

I’ve long been a big fan Tina Fey fan; starting long before the Sarah Palin resemblance propelled her to international prominence. I was enthralled back when she was the SNL news anchor. But what sealed it was when, during an episode of Thirty Rock she was in a video conference, saw herself and said, “My eyes are so far apart, I look like Admiral Akbar.”

A reference to Admiral Akbar, leader from Mon Calamari and commander of the rebel fleet! For a Star Wars obsessed guy -

This isn’t just liking Star Wars this is true dorkdom (a reference to General Viers would probably make me foam at the mouth).

But here is the thing. I won’t say my wife gets jealous exactly. But… 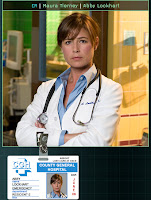 I mentioned once that I thought Maura Tierney was “talented.” Not “hot,” which my wife generally ignores. “Hot” is just lucky genetics, not a cause of concern to a wife.

Some time later my wife casually mentioned during a Maura Tierney scene on ER, “You can see that she is really heavily made-up. Look at her hands.”

Now, any joy at seeing Ms. Tierney on screen is overshadowed as I visualize hands that look like they belong to Admiral Akbar.

I don’t know what my wife might have on Tina Fey – I don’t want to think about it.

Worse, I might retaliate by criticizing Sportacus (while my wife seems to take an inordinate interest in watching Lazy Town, at least she isn’t writing Sportacus fan fiction.)

It would escalate from there, as my wife ruined Laurie Berkner for me…

I don’t want to see it go this way, so I’ll just keep my latest issue of Vanity Fair hidden. (Under the mattress is no longer viable – and a little creepy – fortunately, my office is a mess.) But at least in this case, when it is inevitably discovered I can legitimately say I had it for the articles – although that might only make things worse.
Posted by Father Goof at 8:35 PM