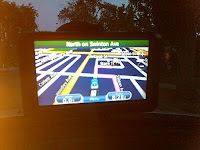 Of course Luke Skywalker only destroyed the Death Star after turning off his navigational computer and I bet he had a monster hippocampus.
Posted by Father Goof at 9:53 PM