Is there a term for aunt-in-law?

A year ago, about this time, I was in Los Angeles at the funeral of my wife’s beloved aunt, known to all as Nana.

She was four foot ten, and a giant.

Her life did not begin with tremendous promise. She was born in a provincial town in Guatemala to what we would now call a single mother, who did not live many years after her birth. She and her younger brother, my father-in-law, were sent to live with relatives who put them to work. (Social services in in the twenties and thirties in backwoods Guatemala left a bit to be desired.)

They both worked hard - very hard – taking advantage of what opportunities came their way, and they stayed together. They were each others only real family.

In the 1950s, my father-in-law, a man of great industry, had an opportunity to come to the United States. He insisted on bringing his only close relative with him.

They made their way in the United States and my father-in-law got married. Nana did not and stayed living with him. It is easy to imagine this being a difficult situation. But it was the opposite.

She and her sister-in-law were like sisters and, more importantly, friends. To my wife and her siblings she was a second mother. It goes without saying that she was another grandmother to the little Goofs. GoofBoy remembers her beautiful garden. GoofGirl remembers the yummy beans she made, and how sometimes Nana would invite GoofGirl to help her in the kitchen. BOTH however, immediately thought of her yummy sweet cookies. 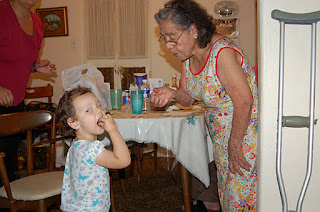 This picture was from a couple of years ago, GoofGirl would be almost Nana's height now.

Nana was a brilliant cook (a talent that my wife happily - for me at least - inherited.) She worked as a seamstress and taught her nephew (my wife’s brother) how to sew. It is a skill that served him well, he is a surgeon now.

Nana's secret was simple. She was kind. She lived to serve and found great joy in it. All her life, she would truly rather cook then eat. No surprise that the she had a green thumb, the plants too could feel her love. When she died, her cat Winky kept lingering around her bedroom – looking for her.

Her last few years were difficult. She was very sick, but she held on, there was iron in that little frame.

She was a tiny woman with a gi﻿ant heart. 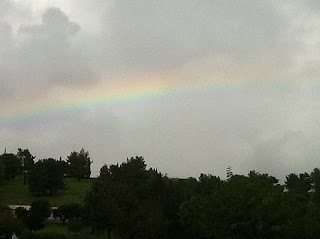 It rained as we laid her to rest. Somehow, it always rains for funerals - even in Los Angeles. But not every funeral is graced with a rainbow. Nana could teach the angels a thing or too about kindness and the cherubim are about to get a bit chubbier.
Posted by Father Goof at 10:39 PM