Youth Vote at My House

My son has been firmly in the Obama camp for a while (despite an early flirtation with Huckabee.) My son's argument was simple, we've had lots of old Presidents. 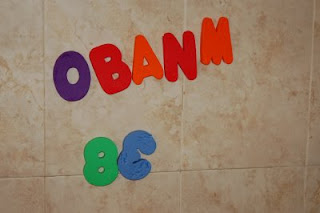 My daughter's stand was unknown, she expressed a fondness for McCain, because he was "wrinkly" but I doubted her level of commitment. If I read the fuzzy bathtub letters right (and it's tough to say, since, at four, she can't read or write), she's made her call.

The truth is, over at Goof Manor, only one man in the world could compete with Obama -

For the youthful generation, no President is a greater source of interest or fascination than old #27. Whether it was his need for a plus-sized bathtub, or his fixation with canned ham, or maybe those terrific pictures of him golfing there is no President better for a good belly laugh than Taft.

Can ya dig it?

Taft has become a regular subject of discussion in our home. The other day my daughter had an enormous poop (she's potty trained, but still needs a little supervision). I won't go into details, but it made me recall the middle school science unit when we learned that there are over 20 feet of intestines inside the human body. Potty time is, unfortunately, a family affair so my son got involved and offered color commentary. My daughter looked up from her throne and asked, in a strained voice - her face showing the wear and tear of production, "Is it because I eat like Taft?"

Two Versions of "Taft" to the tune of "Shaft"

The kids love this one.

This one is a little raunchier.

This is totally different, not "Shaft" themed but very informative.