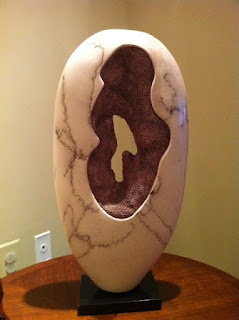 I don't know what has happened to my father in his dotage. He actually paid money for this sculpture - loves it. He says it makes him think of coral.

I think it looks like something else (use a bit of imagination), and I kind of don't like being in the same room with it. So I did what any sensible son would do. I casually mentioned to my parents how much my brother liked it.

"You should definitely leave it to him in the will," I tell them, frequently.

"Funny," my dad responded, "Just the other day, your brother was telling me how much he liked it but that you liked it even more and I should definitely leave it to you in the will."

"Isn't it great, how all three of us appreciate the same sculpture. You know, I have an idea?"

"Bury it deep underground so it doesn't become a point of contention between your children?"

"No, I'll get in touch with the artist and commission one for each of you. I plan to be around for awhile, and I hate to deprive you both of sculptures you like."

"And you know what else is neat," my father continued, oblivous, "When you own a sculpture you can touch it, you can appreciate its feel. Come, feel this part, it's like coral..."
Posted by Father Goof at 9:12 PM