The phone ringing while I am preparing breakfast for the little Goofs is rarely a good thing. This morning it was Carpool Clan's mom.

"This is a strange request," never a good beginning - put it probably doesn't mean she will ask me drive carpool - which means I don't have to put on pants soon.

"Do you have a set of handcuffs?" she continues.

"Ah..." Two thoughts go through my mind here, first do you really want to borrow handcuffs from someone who owns handcuffs? Second, which Carpool Kid had driven her over the edge and needs to be taken into custody. My interest here is not strictly academic, there is a betting pool on this (I've got 300 quatloos on the new guy).

"The little one needs it for his Purim costume," she continued, aware of how such a request must sound without context.

Purim is the Jewish Halloween/Mardi Gras: up is down, right is wrong, and a people characterized by a low tolerance to alcohol tries to keep up with their Eastern European neighbors. It is wacky day for a wacky people.

It can also be a hassle, particularly the costumes. Interestingly, GoofGirl hasn't been a problem. Last year we went to the party store without any ideas. She picked out a tail and some cat ears and announced she was going as a cat. Couldn't have been easier! 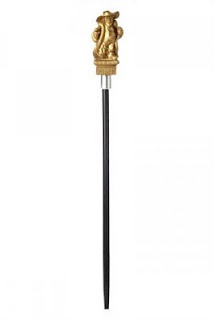 GoofBoy on the other hand yelled out, "Daddy, can I make a costume with this pimp stick?"

"Why not? It looks cool." It said "pimpstick" right on the package. No good would come from any aspect of continuing this conversation. There was nothing about this that I wanted to explain, so I pulled rank and threatened major sanctions if he didn't just drop it. This time he obeyed.

Instead he found a Mohawk wig and a costume gold chain and said, "Can I go as Mr. T?"


Now I have another conundrum. Mr. T is African-American, is it OK for my son to dress up as an African-American? He won't be wearing black-face or anything truly offensive. Barack Obama is president, we live in post-racial America. The guy who does Obama impressions on SNL isn't African-American. Besides, Mr. T is a public figure. And I pretended to be my hero Eddie Murray when I was a kid playing modified baseball in the parking lot at the abandoned glass factory next to the Midas Muffler (if you hit the d it was an automatic grand slam.) Another white kid pretended to be Ken Singleton.

In one of those odd coincidences an acquaintance who is Jewish and African-American was also at the party store buying Purim costumes for his kids. He heard everything and only laughed (of course he was wrangling his own kids).

GoofBoy had no idea that any of this could in any way be an issue. Which I guess really says it all.

To help GoofBoy get into character for his costume I found some old videos from the A-Team online. But I also found this incredible video.

What gets me is that Mr. T is wearing short shorts and tube socks - he dresses like I did when I was eight!

This year Purim has been easier. GoofGirl is going as her brother, which is easy since they are twins separated by three years and GoofBoy is going as Bill Gates, which in his mind means wearing a hat.
Posted by Father Goof at 9:24 PM

'tsokay, I went as the tooth fairy.


I wore a black jacket, black pants, a leather belt, a bag of teeth ( chinese erasers; quite the find) and two sets of pliers. Oh, yeah, and purple wings.
I didn't say I was some pansy- a** toothfairy, did I?

Oh, yeah Mr Guillotine - he originally wanted to go as a ninja, so I bought him a sword. But hen he decided not to go as anything. I"m using the sword next year.