This time, the Snowpocalypse was a little scary. The power went out. Our furnace, and most of the furnaces in our area, requires electricity to run. I called our furnace guy about starting it manually and he only said, “Please don’t!”

The resulting inferno might have helped clear the street though…

Without heat houses can get very cold. And without passable streets we couldn’t go anywhere. Thankfully our house held its heat pretty well, staying above 50 (which isn’t too bad, all things considered.)

Call to Arms
In the face of this situation I had only one response – shovel. Because in a snowstorm that is what men do. (Actually, real men have snowblowers and tractors, but don't like loud noises and am inept with machinery so Mama Goof would be running the snowblower. Hence, no snowblower, my ego can only take so much of a beating.)

I was thinking catastrophically. If the plow came by we could leave and if the house got too cold we could warm up in our cars. It also gave me something to do and kept me out of a house full of yelling kids. I chatted with my neighbor who was thinking the same, explaining, “It’s like a pack of gibbons in there! Why do you think I am out here poking snow out of the trees with a broom?” 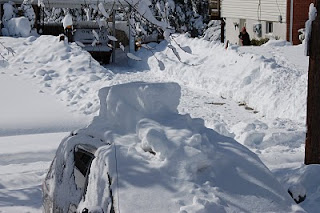 The snow was piled so high that as I cleared snow off the cars I played avalanche allowing huge boulders to fall on me. I couldn’t quite reach the top of the minivan – so it sports a geriatric Mohawk.

I brought the kids out to play, but they kept getting underfoot running along the shoveled walkway. I finally figured out that it was very had for them to get out into waist-depth snow. So I dug a path and a snow-base for them. 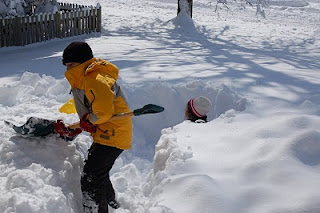 Shoveling solves most snow related problems. But it does eat up a lot of energy – certain restoratives are needed.

Winter Storm for a Winter Storm
And then the power came back and the street was plowed. So what did I do?

The plow left a pile of snow blocking our driveway. Time to shovel, followed by a bit more winter warmer. 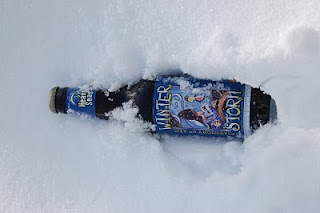