I wish there were a dad camp (not a retreat where we discuss our feelings) but rather an intensive course where I could pick up certain basic “dad skills.”

I have no knowledge or skill at any sport. I am a good dad, so I sit out in the heat watching him play baseball and soccer or in the cold for flag football. I can play catch, but that is about it. I can’t help him with his skills – I have no idea how he should swing or how to throw a curveball. In my own Little League career, my primary skill was getting hit by the pitch. During his games my big piece of advice is to tell him how John Lowenstein would keep his wrists loose by flushing the dugout toilet. He laughed the first time he heard this.

With football, except for my stubborn insistence that Johnny Unitas was the greatest quarterback of all time and that Art Donovan used to play with a cast on his broken arm and use it to deck opposing players, I know even less.

I’ve had nightmares where I’m handed the clipboard and appointed coach because the other parents are all busy. I’d like enough information to handle that contingency.

It would also be handy to know enough about these games that when he started talking about professional sports, I had some capacity for response. Sure I could read the sports pages and watch the games – but that is a lot more commitment then I am willing to make. I haven’t followed baseball since the strike in the early 1990s and I haven’t followed football since ever. (Oddly, I do know a bit about boxing in the 1940s and 50s, but that is because I read old books by A.J. Liebling.)

However, this might hurt me on another level. I let him participate in a fantasy football league on the condition that if he ever gave me trouble with homework I would take over his team and accept any trade that was offered. He know that my ignorance of football would mean he'd have a team of all kickers within an hour.

I could also use some guidance on buying boy stuff – sports equipment, weapons etc. For example, GoofBoy is interested in fishing. I have no problem with this, but that means I have to buy him a rod and other fishing equipment. Here again, I know nothing.

It isn’t just sports stuff where I could use some help. I wouldn’t mind knowing a bit more about my video camera. I know how to turn it on and on a good day I can load the video onto my computer. But I don’t know how to frame a shot, so when we watch it looks like some form of cinéma vérité filmed by people with degenerative nerve diseases.

I should probably also learn to play poker…

It isn’t just skills, it is an attitude, a can-do pioneering spirit – maybe a certain aloofness. Also, I should know how to carve a turkey.

I notice that this is heavily boy-centered (not that girls can’t play sports – I’d be just as hopeless helping GoofGirl). I should probably balance it with classes on how to buy shoes and polish nails but Mama Goof already has that stuff down (and more!).

Somehow, while also proving more than capable of holding good jobs and running things women have held onto that innate knowledge. But for men, the era of Johnny Unitas has past. What came naturally to our fathers has been lost. I bet I’m not the only dad who could use a crash course – an Executive MDA (Masters of Dad Adroitness). 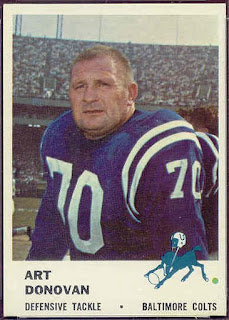 Maybe Art Donovan could teach a course.
Posted by Father Goof at 11:49 PM