The Goof clan has survived Rosh Hashonah yet again. Welcome 5770.

A high point of our holiday was Mama Goof's quiche. It is always such a hit, that as a public service I have written up (and embellished) the instructions and put them online.

Nonetheless, do not necessarily expect similar results. Mama Goof (now joined by GoofGirl) insist the secret ingredient is love. Ironic that a love-based dish is so bad for the heart.

• 1 1/4 cups (about 6 oz.) diced or thinly sliced swiss cheese (remember when measuring to take the holes into account)

• 1 1/4 cups whipping cream (make sure to pronounce the h in whipping, whipped will also work, but who wants sullen cream?)

• Some people include nutmeg, some people believe the universe rests on the back of a giant turtle – neither applies to us nor should it apply to you

i. Evenly distribute cheese (and mushrooms or spinach if you choose to include them) over the bottom of the baked pastry shell

ii. Beat eggs (mercilessly – but don’t enjoy it, that’s creepy) until blended then mix well with cream and milk

iv. Bake at 325 degrees for about 40 minutes or until custard appears firm when pan is gently shaken (amongst the chichi quichey circles this is known as “Custard’s Last Stand”)
Posted by Father Goof at 8:44 PM 4 comments:

We are preparing for Rosh Hashanah, the Jewish New Year – which initiates a period of contemplation but also of joy.

My wife is barefoot in the kitchen (but not pregnant – leaving the trifecta incomplete – but I have no complaints she’s making brisquit.) My daughter has a friend over and my son is giving them lessons on how to blow the shofar – it sounds like an oboe but with less pitch.

My son got a new shofar from a class trip to the shofar factory. The new shofar has the twin virtues of being much easier to blow and of stinking like a ram’s horn processed with lye (because that’s what a shofar is and how it is made). My daughter’s friend, a little girl in pink, has a surprising knack for getting a bleat out of the shofar. It is a trick, you don’t really blow – you sort of purse your lips and spit. No doubt my training my son in flatulence noise impressions has helped to prepare him to become a shofar prodigy.

My daughter’s friend’s surprise talent has two consequences. First, my son, under the guise of “teaching” issues multiple, lengthy blasts of sound and urges his pupil to follow his examples. It is kind of like dueling banjos but without the snappy tune.

The second consequence is that GoofGirl hides under the dining room table sobbing loudly that she can’t do anything right – a vocal accompaniment that is appropriate to the cacophony. Also, the living room is starting to stink as each blast from GoofBoy’s shofar showers the room in the smell of dried marrow and lye.

Defusing the Shofar
OK. First, I disarm GoofGirl’s friend – the accelerator in a volatile situation. It isn’t her house, so she is inclined to be obedient. Then I need to stop my son, the trigger if you will. I tell him we cannot talk sports if he keeps blowing his shofar. I will pay for this later.

Now for the detonation mass: my daughter is under the table sobbing. I get down to her level and begin telling her a story:

When the Jewish people were freed from Egypt the saw Hashem at Mt. Sinai. They could only look for a few minutes because Hashem is so great, powerful, and awesome.

How can you see Hashem daddy?

You can see Hashem in everything, but this time, thousands of years ago the Jewish people saw Hashem directly – not through something else. The sound they heard was like a powerful shofar, so that is a very special sound for us.

But, the rabbis say…

Are you a rabbi daddy?

No, you know that. But listen anyway, even if it’s just me telling you. The rabbis say that the most important thing about the shofar isn’t to be able to blow it – it is to hear it. Because the shofar is a call for us to try to be better people, grow up a little bit more in the coming year (even if you are already a grown-up.) Anyone can learn to blow the shofar with a little practice. But being a better person is really hard. I know you are upset, but you are also being a little jealous. You should be happy for your friend that she has a talent.

My daughter had a retort – but my wife, cut my “Father Knows Best” schtick short with a flanking maneuver.

Everyone sits down and my son begins, “Dad, do you want to know how I think the Orioles should change their line-up?”

Not really, but I am trying to be a better person…
Posted by Father Goof at 2:59 PM No comments:

My wife was telling me about what her colleagues at work say about discussing the "birds and the bees" with their children. This is something I would be happy to put off as long as possible. I've already decided to keep GoofGirl in a burqa. GoofBoy, by comparison, should be easy to handle. I know how to keep girls away from him. I'll give him time-tested advice. I will tell him every technique, trick, and move I've got (mostly stolen from Seinfeld episodes). If that doesn't keep the girls away - far away - I don't know what will.

At least that's how they worked for me.
Posted by Father Goof at 7:19 PM 4 comments:

My son wants to play sports, any sport, all the time. His sister would be a perfect opponent, except for a crippling lack of interest in any sport at any time (except for boxing – an interest I strongly encourage because one day she will be fifteen.)

After breakfast, my son invented pajama dodge. That is they throw their pajamas at each other. This is the kind of sport GoofGirl can go for, at least for a while. She enjoyed the novelty of throwing her clothes around. But my son really wanted orderly tournament level play.

GoofBoy is also a wonderful big brother (most of the time) and he has been known to give his sister massages (yes he will undoubtedly make some girl happy in a decade or so – assuming I let him live that long.)

So he gave his sister an incentive to really play, offering her massages when she wins. It worked. GoofGirl focused and bore down. Grunting as she hurled balled up pajama bottoms and tops at her brother. Her brother, though older, stronger, faster, and more experienced was cornered. He tried to counter with psychological warfare (trash-talking.) But his sister was nonplussed, yelling, “I’m just doing it for my massage.”

After a bit more battering GoofBoy conceded and paid up. As he worked on her back and feet (kindergarten is pretty stressful) she smiled and sighed. My son smiled too, he wanted a worthy opponent and he created one.
Posted by Father Goof at 12:23 AM 3 comments:

The President Speaks to My Son

In a few hours my kids will be exposed to the President, I rather look forward to it – or at least the aftermath.

I don’t think the speech will turn my kids into Communists, an outcome I kind of expect anyway (my Trotskyite father’s revenge – he wanted a red diaper baby, I gave him every color but…)

Based on the prepared remarks it looks like the same kind of pap that principals, teachers, and other good citizens (including occasionally parents) try to tell kids daily – rife with earnestness and a few lame attempts at humor. Will the kids buy it because it comes from THE PRESIDENT? Does the President believe that they will buy it because he says it? He has daughters. He can’t possibly believe this. I’m sure when he pontificates at the dinner table Sasha and Malia roll their eyes at their dad, just like every other daughter in history. (Please don’t tell me this is just me.)

I am looking forward to a different aspect of this Presidential address. My son seems to believe that it will be a two-way communication. I have not discouraged this notion. My son likes to talk about sports. He attempts to discuss them with me incessantly even though my sports knowledge effectively ends with Wee Willie Keeler. My son is hoping to talk sports with the President. My son would also like to talk sports with his sister, his grandparents (who reject athletics as an element of bourgeois cultural hegemony) dogs, light fixtures… and you.

I told my son that the President would love to talk sports with him, but his stick in the mud teachers will probably try to keep him quiet.

I look forward to this afternoon’s phone call.
Posted by Father Goof at 10:29 AM 2 comments: 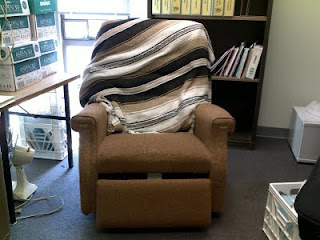 So Father Goof is back at the office. Not just his beloved (albeit untidy) home office - his actual office where he shows up on occasion lest his boss forget he works there. The best thing about my office is my chair. I inherited it from my grandmother who died eighteen years ago. It is ugly (and a little funky - not in a jazz club sort of way either.) When my wife first came over she looked around and did a mental calculation, "He can stay, but that chair has got to go."

But I held on, through several apartments and for more than five years in our house. Finally, as we re-did the den she out-maneuvered me and I could not protect it any longer. Fortunately, I had just moved to a new office and found it a new home there - where no one can come between us. Because it may be hideous, and I'm not sure blanket helps - like putting a muumuu on a camel - but it is really comfortable chair.

In fact, when people come to my office to meet with me, they make a beeline for the chair. 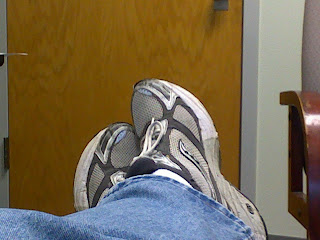 One thing about my work is that it comes in odd bursts that break the leisurely cycle and call for long days and occasional all-nighters. Father Goof isn't complaining (after all I get to keep my chair at my office), just saying. So after a recent bout of long days, I had to come into the office for some meetings. I dropped off the kids, drove in, and, exhausted, got to work, planted myself in my chair and realized...

I'm George Jetson (except for the giant talking dog, robot servant, and hover car...) a pretty cool life outcome, better then I would have guessed thirty years ago.

"The Jetsons" intro (Classic TV) (Retro)
Uploaded by SegaSaturnFan. - Check out other Film & TV videos.
Posted by Father Goof at 3:32 PM No comments: