Pesach is a big Jewish holiday, the favorite and probably the best known. It is loaded with tradition, has a great story, lots of songs, and – of course – food. Father Goof has written many times about the Goof family traditions, so here is compilation from Pesach pasts.

One of our traditions is watching the Cecil B. DeMille class, The Ten Commandments. My social worker mom (Bubbe Goof) says subjecting children to this is overwrought and overly long film is a form of child abuse. But the little Goofs insist.

For Jews of Eastern European descent, Yiddish – the funniest language ever and a consolation prize for living in Russia surrounded by Russians – has a certain romance to it. The Goofs do their bit keeping the language going with a traditional Pesach song, but in Yiddish, not Hebrew.

Pesach is a wonderful holiday, but one of its central elements is its special dietary requirement of no leavened bread and nothing made with a leavening agent (and a whole bunch of other things like peas and peanuts.) Lots of foods are specially made for Pesach – for example soda, which is often made with corn syrup (which is out), is specially made over Pesach with sugar. It is actually a real treat. But this means no beer and most liquor is out (although wine is no problem.) Still, man doth not live by wine alone – sometimes alternatives are needed. Most kosher for Pesach liquor is slightly more palatable then rubbing alcohol. But Father Goof found an alternative.

Finally, at the end of the Seder we sing “Next Year in Jerusalem.” So I tried to start a little tradition. Judaism’s holiest site, the Wailing Wall is in Hebrew called the Kotel. So, as I sing I bring out a wall mode out of boxes of Kosher for Pesach jello. 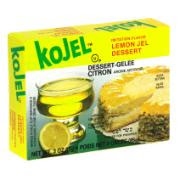 Maybe you have to be there...
Posted by Father Goof at 8:15 PM No comments:

GoofBoy attends Jewish Day School where he learns (as Jews have learned for thousands of years) not only the Holy Scripture, but also the extensive commentary on this scripture. Part of his assignment is to then teach it to me. Recently we had a heated discussion about the actions of the Biblical Jacob. The question was whether Yaakov acted correctly in trying to mollify Esau or should have been more confrontational - and which path is wiser in life generally.

GoofBoy felt being agreeable was better then fighting because Jews have been so vulnerable they had to save themselves anyway they could.

I disagreed, saying that sometimes you must stand up for what you believe. I mentioned Modechai and Haman from the recent holiday of Purim. Mordechai refused to bow down before Haman, saying that Jews did not bow down before anyone but G-d. Haman, the vizier, went to the King and told him about the Jews who wouldn’t bow down to anyone and got authorization to have them all killed. (Welcome to the wonderful world of Jewish history!)

GoofBoy said maybe if Mordechai had just bowed down we wouldn’t have had any trouble. I told him that Haman was obviously such a bad guy (mass murder is pretty bad stuff), that sooner or later you would have had to stand up to him so better sooner then later. Besides, what kind of man would Mordechai have been if he just bowed down?

We kept arguing, citing various examples of both conciliation and assertion.

After forty minutes, he said, “I’m not giving in dad. I’ll argue this all night!”

I gave in, quite satisfied that he had unwittingly proven my point.

My little shtarker!
Posted by Father Goof at 11:17 PM No comments:

The Perfect Gift for a Father and a Daughter

Recently, GoofGirl actually allowed me to stay and watch her in gymnastics class. This was unprecedented, previously as soon as she was changed she started yelling, "Go away daddy! Go get coffee or beer or something!" And I did.

I wondered what brought on this change, growing self-confidence perhaps or just general maturity?
Of course, knowing my daughter the real question is, "What does she want?"

A friend suggested that it was obvious, she wanted a pony. But I know that's not it, she's already got one.

Several years ago my wife asked me what I wanted for Father's Day. I told her I wanted a Daddle. A central responsibility of being dad is horsey-back rides. My son was never interested, but my daughter went for them from the beginning (I've also got my niece into horsey-back rides and she pesters her dad - one more bit of torture I've inflicted on my younger brother.)

The discussion occurred in the dark in bed, but I could hear her eyes roll back into her head. I was not going to get my Daddle.

Now, at least five years later I still give GoofGirl horsey-back rides. She hits me in the tuchus with a wooden spoon, yelling, "Mush, mush!"

She also stands on my back as I crawl around the room, like a circus act. She makes me gallop and jump (this is very hard for crawling bipeds.) So I'm not as good at jumping or galloping as a real horse, but I go up stairs. Even Mr. Ed couldn't do that.

But it was all worth it the other day when my wife said, "If I had known you would still be letting her ride around on your back, I would have gotten you the Daddle."

Of course I still don't know what GoofGirl wants...
Posted by Father Goof at 9:24 PM No comments:

Hoof it to Ft. Foote

Today The Washington Post’s Weekend Section featured A Tour of Civil War Washington. Great stuff, including Lincoln’s Summer home and a fort (now surrounded by apartments) which was the site of the Civil War’s only battle within DC, but Father Goof would like to add a stop.

A few winters ago I needed to take the kids somewhere. A few months before I had taken GoofBoy to Ft. McHenry and GoofGirl wanted to see a fort too. She particularly wanted to see the “cannon-shooters.” I was willing to drive, since we were listening to one of the Harry Potter Books. So I thought I would take them down to Ft. Washington, an enormous fortification on the Potomac that guarded the nation’s capitol. However, I couldn’t find it – I have an extraordinarily bad sense of direction.

But I kept passing signs for Fort Foote. (I’d never heard of it) but finally I gave up on Fort Washington and went to Fort Foote. There was just a dirt parking lot and some woods. We walked around a bit and didn’t see much of anything (although the kids were pretty excited about brightly colored pebble they found – probably from an aquarium).

Then we found a path into the woods. There were some odd little hills. Then we found historic markers that explained that Ft. Foote was an earthwork so there were no massive stonewalls, just big piles of dirt. We started wandering around. We found some ruins of barracks, cannons, and spectacular views of the Potomac River.

I love our National Parks and will go on Ranger walk after Ranger walk (I’m the guy asking annoying questions!) As a visit to the website shows, this is not one of the gems of the system - no events, no talks, not reconstructions, not much of anything. But that made it awesome! I let GoofBoy take the lead, GoofGirl followed him and I took the rear (in case there were any Confederates infiltrating.) When we came to a creaking bridge – there was no one around to tell us not to climb on it.
We just run around, exploring and climbing onto and into.

Gettysburg it ain’t, but the site’s lack of importance and development of the site gave it its charm and made for a great day of exploration and adventure.
Posted by Father Goof at 6:13 PM No comments:

Email ThisBlogThis!Share to TwitterShare to FacebookShare to Pinterest
Labels: adventures

Every week Jews around the world read from the Torah, better known to many as the Pentateuch. At the age of 13 Jews stand before their congregation read a portion of the Torah and give a little lesson about it. The lesson usually is part interpretation and part about how this portion will inspire them to further their Jewish study and commitment. Then they never come to synagogue again (just kidding, sort of…)

Different cultures have different rituals for bringing young people into adulthood. In many societies young men have to hunt or fight or something else physical. For Jews, we have to prove that we can read, do so in public, and show that we understood what we were reading. It is an open question which path is more frightening. I wouldn’t want to face a dangerous animal in combat, but trust me you don’t want to read and speak in front of my great uncle Moishe. As a mechanism for cultural survival, public reading would seem to be at a disadvantage to hunting. But Jews are still around and you don’t run into many Hittites or Assyrians these days (has Ninevah risen?)

Some Torah portions are pretty good and easy to talk about, like the parting of the Red Sea, Cain and Abel, or anything with Jacob! Others can be a little tough, like the extensive instruction about how to construct the Tabernacle (which doesn’t seem to have a lot of contemporary relevance since we don’t wonder around the desert anymore.) Sometimes our G-d is a harsh judge and sometimes our G-d is an extremely demanding interior decorator.

My own portion, about a century ago was the story of Balaam, which was kind of awesome since it features a talking donkey. There is another word for donkey and I made sure I used it before the congregation while giving my lesson.

This past Shabbat we read the portion Tazria. It is about leprosy and skin disease. It gets quite specific, describing different kinds of rashes, eruptions etc. Depending on the color, sometimes a priest needs to be called. Not the easiest stuff to discuss, especially in front of your aunts, uncles, and grandparents. But that is not the end of it. Classical interpretations of this portion conclude that it was not the disease leprosy, but a dermatological outbreak brought on by impure thoughts.

A skin condition brought on by impure thoughts, just the kind of lesson a teenager needs.

I think GoofGirl might get this portion – by then I’ll want something that gives her some second thoughts.
Posted by Father Goof at 11:35 PM 3 comments: