In writing about taking the little Goofs to see 42: The Jackie Robinson Story on Mother's Day I forgot to mention that I actually have a story about Jackie Robinson and my mom.

Not that they ever met, or were even in the same city at the same time.  It isn't that kind of story.

When I was a kid I was extremely interested in baseball history including lots of biographies of baseball greats including Pee Wee Reese, Tony Conigliaro, Walter Johnson, Babe Ruth, Ty Cobb, and of course Jackie Robinson.


Robinson, sadly, died relatively young from the complications of diabetes.  Whether this was connected to the enormous stress from his years in the majors or just bad breaks is not clear - although this particular biography made the direct causal connection and discussed his medical case in great detail.  I don't know why a children's biography of Jackie Robinson would go into such medical details, but it was the 1970s - an odd time.

One afternoon a friend of my parents came by for coffee.  His youngest son had just been diagnosed with diabetes.  As we sat around the dining room table chatting my mom encouragingly said

"Well, no one dies from diabetes."

"No, people do die from diabetes!  Jackie Robinson died from diabetes," I announced, happy to contribute to the conversation.

"That was a while ago, the treatments are much better now," my mom said - in what I now realize was a very cool tone.

"No, it was only seven years ago.  And before he died he was bleeding out of his eyes!" I added helpfully.

"Thank you for sharing how smart you are." mom said, her tone just a few degrees above Kelvin.

Our guest smiled wanly and took his leave.

Later that day mom asked to speak to me.

"Do you think Brian's dad has already talked to doctors about diabetes?"

"Do you think he probably knows all about the risks of diabetes?"

"Do you think he wanted to hear about how awful diabetes can be?"

"It's called tact - you'll need to learn it," mom dismissed me.

I won't claim to have learned tact - but an important part of growing up is at least knowing that it exists.
Posted by Father Goof at 4:35 PM No comments:

So it was Mother's Day, and I did what I do - take the children away so Mama Goof has time to herself.  She sorted through old paperwork - you can lead a horse to water...

After chauffeuring them to their morning activities I plotted out an adventure for the little Goofs.  It was a beautiful day and the greater DC area abounds in opportunities, but the little Goofs resisted.  So I made them lunch and insisted they accompany me on a walk in the park before I took them to dinner and a movie.  They reluctantly agreed.

But the park means a stream (and the little Goofs really, really like streams).  More, GoofGirl has found a new redoubt from which to hurl rocks into the water.  This spot has particular charm because it is at least 30-40 feet above the water, leading to extremely satisfying splashes.


After over an hour of this I had to drag them away if we were going to get to our movie.  I would like to do an experiment and see just how long they could keep at the project of digging up rocks and dumping them into the stream.  I'll need a tent and some food because I think they'd be happy doing it for days.

I hope they never change.

Dinner and a Movie
The options for kid movies appears a bit weak right now, but GoofGirl suggested the movie about Jackie Robinson.  Like any responsible parent I checked to make sure it was appropriate and found out it contained bad language. I don't have a big problem with my children seeing modest bad language in a movie - I assume they already know the words, but they also need to know not to use them.

So we got dessert and dinner - in that order  - and saw 42: The Jackie Robinson Story. 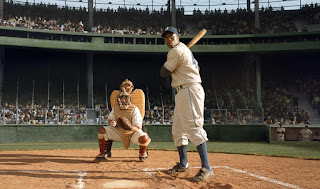 The kids really liked it and I liked it a lot more than I thought I would.  Yes, it could be sappy and there were few chewy twists to the plot.  But it is simply a great and inspiring story.

GoofGirl was furious that people were treated the African-Americans were treated in that era.  She demanded to know why people could believe the things the bigots in the movie believed.  I didn't have an answer that satisfied her, my efforts to introduce historical context had little weight to GoofGirl's outraged sense of justice.

She also showed some keen insight, recognizing that had we lived then, these things would have applied to us since MamaGoof is Latino (and I guess so are the little Goofs.)  This only made her angrier.

Her big problem with the movie was that the baseball scenes weren't as clear to her.  So I went over the rules and basics.  As I did so, she narrowed her eyes and said, "Oh, like in kickball."

GoofBoy loved it to and hoped to apply some of the tactics in his upcoming Little League game.

I warned him sternly, "If you yell racial epithets at the other team, I will kill you!"

GoofBoy rolled his eyes, "Dad, the whole point of the movie is that it didn't work!"

Unfortunately, GoofBoy did not have the opportunity to sow dissension on the basepaths like Jackie Robinson - he was hampered by not getting on base. 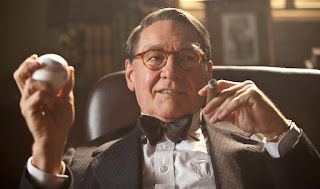 As for me, well I liked it.  The story is inspiring pure and simple.  But there were other touches I liked.  Seeing the era of post-war baseball brought to life when crowds came to the ballpark wearing jackets and ties and General Managers sat around their leather and wood offices smoking cigars evoked of an era of grown-ups.  When I was kid, the old Brooklyn Dodgers were already legends - I remember reading a biography of Pee Wee Reese and names like Ralph Branca and Eddie Stanky were already bits of baseball lore.  And Red Barber, the great radio announcer...

But all of that was lost in the shadow of the real center of the movie - Branch Rickey.  Harrison Ford was terrific portraying that worldy, sanctimonious fox.  Rickey could was a giant in baseball history - a genius executive and a tremendous judge of character.  Rickey could deliver a sermon while counting ticket receipts and mean every word.  Ford captured Rickey's tremendous charm, but could not hope to capture Rickey's boundless energy.  The big screen is simply too small.  Robert Rice in The New Yorker back in 1950 wrote:


"Any pitcher who has experienced the physical, mental, and emotional strain of working with Rickey for half an hour is likely thereafter to regard pitching a nine-inning game as a peaceful way of spending a summer afternoon."

I have to end on this note - three decades after Robinson integrated the major leagues - when I was at the plate I wanted to be Eddie Murray.  That I was an awkward white kid, while the great Eddie Murray was graceful and African-American was irrelevant - I really wanted to be him because he embodied everything 10 year old me thought was awesome.

And I wasn't unique.  The equally awkward and white Ken up the street wore a shirt that had "Singleton" on the back (for Ken Singleton) while other kids wanted to be Lee May or Jim Rice.

I understand GoofGirl's anger at the incomprehensible injustices she saw in the movie and am sympathetic to those who argue times don't change fast enough.  But I am glad that they have changed at all.
Posted by Father Goof at 1:18 AM 2 comments: