Going Postal: Yet another adventure with GoofGirl

GoofGirl wanted an adventure, so we headed downtown. Her first priority was the National Building Museum. We'd been before, but there was a Beach exhibit there much of the summer that GoofGirl really wanted to see. This exhibit got a lot of attention, I never quite saw the attraction. It was supposed to be a beach, but with plastic balls in which one could jump or swim. People loved it. I thought it was just a really big ball pit - like at Chuckie Cheese.

GoofGirl wanted to see it so we went. We saw the line out the door to get into the "beach" and GoofGirl agreed that we should just go to the second level of the museum where we could get a good look. She didn't need to spend the day waiting in line.

After a visit to the gift shop (where GoofGirl bought a pair of the plastic balls - apparently planning to start her own beach), we headed on.

On this day, GoofGirl had the National Postal Museum in her sights.

There were a pair of brief detours. First, I insisted we stop at the Japanese American Memorial to Patriotism During World War II. A modest monument not far from Capitol Hill, it is a solemn space remember a great injustice. We talked about the sculpture of an eagle entangled in barbed wire as a fitting symbol.

We visited the memorial to distinguished Senator Robert Taft. I explained he was the son of that Taft and GoofGirl observed, "He wasn't the man his father was."

The National Postal Museum
GoofGirl enjoyed exploring the stamps including the famed One-Cent Magenta! There was a time when stamps were objects of wonder, tiny windows into exotic places and also the identity of nations and peoples. Extremely rare stamps were critical elements in adventures and mysteries. The importance of postal services, while much reduced now thanks to telecommunications, cannot be underestimated and stamps remain a window - albeit less viewed.

The mail has touched on terrible things and GoofGirl was horrified in the exhibit on the anthrax attacks, which happened before she was born but touched me personally - albeit peripherally. She also did not like seeing KKK members in their hoods in an exhibit on civil rights. She finds them frightening, as well she should. 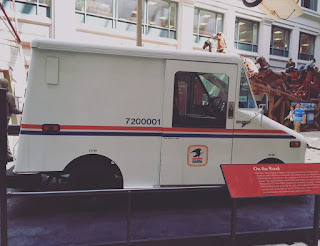 And then we came to an LLV (Long Life Vehicle.) I delivered mail one summer. It was very, very hard work - particularly in humid gr
eater Baltimore. And I drove an LLV (yes, I also got to drive a jeep.) Something I used is in a museum, sigh.

Whatever images one has of lazy postmen (Cliff Clavin - Hello Newman), that was not my experience. Mail is measured in feet and a certain number of feet have to be delivered per hour. This left little time for breaks. I walked miles, carrying many pounds. I came home tired.

This was 1990, well before easily downloadable audiobooks. If that had been part of the equation I would have loved the job.

When I got back to college, I had a few stories. Friends would ask what I did over the summer and I would say, "I delivered mail."

There was the woman deeply concerned when her church's magazine didn't come in the mail one day. She had been waiting right by the door and was pretty disappointed. "But it comes religiously!"she told me.

I had to shoot a dog with pepper spray once, it was a little dog but it was really mad at me. Another time, a big dog, protecting a little boy came after me. It was barking and I was getting concerned. The little boy had his arms around it, crying, "Don't shoot him!"

I didn't, but it was just pepper spray - and he was obviously a good dog.

I had a few other stories, but more remarkable was my deep rich tan, which ended at my ankles. When I took my socks off, my feet were bone white and practically glowed in the dark.

I began to reminisce with GoofGirl. She rolled her eyes. Turned out, she had heard all of my stories. I was not revealing anything new. She thinks I belong in a museum and maybe I do.
Posted by Father Goof at 8:56 PM No comments: