Fort McHenry in Baltimore, birthplace of our national anthem, is a great place to take the kids on Memorial Day. A few years ago I took GoofBoy and we had a blast. He climbed over the walls and the cannons, we went into every nook and cranny of the fort together. Because it was Memorial Day, there were brief ceremonies and volunteers in period costume answering questions.

Best of all, when we got home he re-created the Battle of Baltimore with Legos. He gave me a tour. There was Ft. McHenry (it is very hard to build a star fort with Lego bricks) and nearby was a squadron of British ships. Then he proudly pointed to a ship that was separate from the others with a little Lego person on it.

Wow, he paid attention. Key, a DC lawyer, was on a truce ship negotiating with the British for the release of American prisoners during the battle. It was from truce ship that he watched the Battle of Baltimore, saw the flag still waving, and was inspired to write the Star-Spangled Banner.

This year, I took GoofGirl. She had been asking to go and was very excited to "climb on the cannons."

It was astoundingly hot (Ft. McHenry was originally swampland.) But our first discovery was the bomb shelter, which is underground and pleasantly cool. We watched the bagpipers and observed the National Moment of Silence. We wandered in and out of the buildings of the fort. I wanted to stay and read every plaque and exhibit but GoofGirl urged me on. Still, she asked some questions of and of the costumed docents about life at the fort. She was particularly interested in the description of the green slime on the walls of the fort's prison.

Unfortunately, there were big signs saying "Do not climb on the cannons." So we looked (and touched) but that was it.

GoofGirl was disappointed, for her this was the whole point of the trip. But she didn't complain. Still, I felt as though this trip had not been the rousing success that the GoofBoy expedition several years earlier had been. Maybe forts are kind of a boy thing. When I asked what her favorite part of the day was, she told me it was swimming in the pool at her grandparents later on. Fair enough. Maybe I should have bought her something at the gift shop...

But, when she came home from school today, she announced, "I wrote four pages in my journal about Fort McHenry. Can I read them to you?"

And she did. She recounted the trip in great detail: particularly how kids are free, how during the Battle of Baltimore people sat up on their roofs to watch the fighting, and how "a lawyer on a truce ship" saw the American flag still flying despite all the British bombs and was inspired to write our national anthem.

Mission accomplished.
Posted by Father Goof at 10:01 PM No comments:

Poop on a Stick

GoofBoy has been sluggish at getting up in the morning recently. But no longer, he wakes up bright and early to play with his new DS. This morning Mama Goof asked me, “How did kids survive before electronics?”

I guess she has forgotten her own childhood, which featured holding a tape recorder up to the TV to record favorite shows. Our generation had electronics; they just were just really pathetic.

“Hoop and a stick,” I answered referring to our running joke about my mom’s favorite toy. I frequently regale the little Goofs with tales of how their grandmother is familiar with ancient history. When the children ask a question about 19th century President Chester Allen Arthur (it happens) I tell them, “Bubbe remembers him, you should ask her she can tell you stories. His train passed through her town once.” 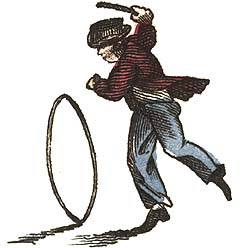 The little Goofs are shocked to hear that Bubbe didn’t have a TV, when they ask me what she did for fun, I tell them she used to play with a hoop and a stick.*

MamaGoof burst into laughter, “Poop on a stick? Who would play with that?”

“You don’t know much about boys do you?” I continued in a little boy voice, “‘Yea, there’s some poop! Let’s poke it with a stick!’ Anyway I said hoop and a stick.”

GoofBoy rushed into the kitchen, DS earbuds still implanted, asking excitedly “Is there poop in the yard? Can we go out and poke it with a stick?”


*When the children asked their grandmother about not having a TV growing up she told them they didn’t have a TV because my mom and her sister used to fight over which shows to watch, so her dad got rid of the TV. This perplexes the little Goofs even more, “Why didn’t she just go upstairs and watch there?”

The idea that a house might have but a single electronic screen is simply beyond their comprehension.
Posted by Father Goof at 10:20 AM 1 comment:

"The guidance counselor came to our class. She had each of us take a little tube of toothpaste and squeeze it out on a plate. Then she told us to put the toothpaste back into the tube.

"So what did you learn from that story?" I asked.

GoofGirl grinned, "While she was talking, I got half the toothpaste back in the tube."
Posted by Father Goof at 6:07 PM No comments:

MamaGoof’s birthday is pretty close to Mother’s Day. So MamaGoof is forgiving if I miss one, but I need to make it up on the other. Fortunately I have help, sort of…

Last year, some of the kids in carpool had just learned about calendars and we discussed the date. This was a pretty hot topic for a while. On MamaGoof’s birthday, when CarpoolBuddy announced the date, GoofBoy said hey, “That’s mommy’s birthday.”

GoofGirl chimed in, “Daddy, you know mommy’s pajamas are practically falling apart. You should buy her some new ones!”

So I did! Nice win, especially since I was completely out of ideas. Now I always consult with GooGirl about presents.

On a recent gift-buying occasion I even took her to the jewelry store with me. She was very diligent, checking to make sure the craftsmanship was sturdy and modeling it carefully trying to envision how it would look on her mom. We ended up picking a bracelet (I’ve already bought Mama Goof far more earrings then she has ears so I thought I should get out of my comfort zone and adorn some other aspect of her anatomy.)

I was impressed and grateful for the help.

Days later when we presented the gifts, GoofGirl announced, “Oooh, pretty! Mommy it looks so good on you! Can I try it on?

She did, modeled it, and said, “Mommy, it looks good on me too. Can I borrow it?”

She thinks several moves ahead and I now see that free advice can be the most expensive kind, but so far it has been worth it.
Posted by Father Goof at 3:46 PM No comments: