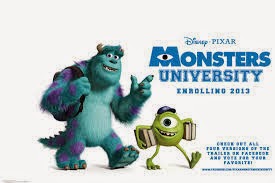 So I caught the movie Monsters University with the little Goofs not long ago. Unsurprisingly, they loved it. It is a movie made by geniuses who apply all of their brainpower to amusing children the age of the little Goofs - and they are pretty amused throwing rocks into water. So kind of a no-brainer.

I, however, was completely creeped out - and not because I am afraid of monsters (I mean, I am, but beyond that.) Monsters University is the sequel to Monsters Inc. My problem is that the prequel presented just a slender part of the Monster world.  But in Monsters University we saw far more of their world and that bugged me.

The fundamental conceit of the movie is that the Monster world derives its power from the screams of human children. But how would the monsters have ever figured this out? In the movie the monsters have all kinds of complex technology and seem to have a pretty complicated society. We even meet monsters who are not involved with the energy generation/child scaring industry.

So what kind of society is it? It is powered by a very specific, kind of strange energy source. Well, they are monsters, so that kind of creepiness doesn't bother them - scaring children is kind of what they do.  But wait, if that's what monsters do, why don't they just all focus on scaring children?  Why did they bother to develop a sophisticated society with universities, technology and government (including a secret police force known as the Child Detection Agency.)  The monsters who don't scare children (apparently the vast majority), do they somehow feel left out?  Are there protest movements to allow public access to doors from which to frighten human children?

Or are monsters like us, and it is just a small number who have the talent and inclination to frighten children? Then I need to know what is the rest of the society like?  We only see the pragmatic technocrats involved in the monster energy industry.  But what kind of cosmology and theology would this society develop?  Would they worship humans?  Wouldn't they wonder about the creation of a universe in which they could reach across dimensions, frighten the children of another species and obtain power for their civilization?

And what about the the human world, have they no interest in it? No questions, no desire to develop deeper more cooperative relations?

Maybe at some point the monsters had other sources of power, but these alternatives caused pollution or cancer or something.  The political leadership of the Monster society determined that this is a strange way to develop power, but it beat the alternatives.  Of course, in Monster politics, as in ours, nothing ever comes without a cost. The creation of an elite caste of dimension-hopping professional scarers must have a strange distorting effect on the society and its worldview - an effect that they stop even realizing after a time as they luxuriated in their cheap source of energy...

OH NO - WE ARE THE MONSTERS!

Told you, Monsters University really creeped me out.
Posted by Father Goof at 11:00 PM No comments: