GoofGirl is learning to read, which is pretty cool – although she is frustrated with it. She can understand complicated stories (she listened to the Harry Potter series with her brother). But the books she can read now are very simple and yet are a huge slog for her to get through.

This is pretty normal. I didn’t really learn to read until I was seven, and I’m a writer now! Living in region dominated by over-achievers where children can be tracked to special education if they aren’t reading by kindergarten – my story is a bit of PTA samizdat. In fact my tale has spread and anxious parents comfort themselves with it like early Christians reciting the catechism in the catacombs.

Anyway, GoofGirl has to read a book to her class. She picked Time for Bed Elephant Small. Before we got into Beverly Clearly, Judy Blume, and Barbara Park this was a bedtime favorite. As GoofGirl works her way through she also explicates the story for me (WARNING: If you are ever planning to read Time for Bed Elephant Small, read no further since what follows pretty much ruins it.) 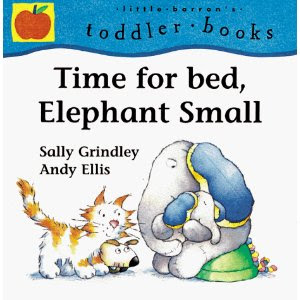 “Daddy,” she explained, “I think the elephants are toys in a dollhouse. A girl is playing bedtime with them. That is why they have those seams and look like stuffed animals. And Clockwork Mouse, who Elephant Small chases before bedtime - he is a toy mouse. That's why he has a wind-up thing. At the end, when Elephant Mom opens the window so Elephant Small can see the moon. I think it is just a piece of paper with the sky and the moon painted on it and pasted to the dollhouse window.”

This clever interpretation had never occurred to me. She will be ready to read soon enough – but I’m not sure reading is ready for her.
Posted by Father Goof at 9:48 PM No comments:

There's Something about a Stream...

It doesn’t seem possible, but going to the stream just got even better.

Nothing makes the little Goofs happier then a stream and we are fortunate to have one in walking distance. Somehow my kids always find an incredibly interesting activity that they can do indefinitely. On one visit my son attempted to block off part of the stream with rocks so that he could better observe the fish. My daughter drew pictures on rocks with mud. We have built rock bridges across streams to facilitate future visitors. It isn’t just about getting muddy – I usually don’t even let them go in, just play along the edges (sometimes I do, I’m not a monster!) 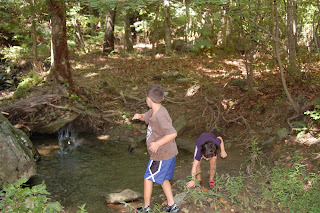 Any modest body of water will do, we often drive to other creeks, ponds, and reservoirs. At one, we made the acquaintance of another family. The dad was scaling the trees very fast, like a lemur. It turns out he is a tree professional. He loved climbing trees as a kid and now he gets to do it for a living. My children were intrigued and I was a little jealous.

On one long weekend, my parents took the kids to an amusement park for a day. They had a great time going on rides and eating junk food. The next I took them to a nearby nature center where the stream has awesome big rocks for climbing. As a bonus, I had them wear grubby shoes so they could actually do a little stream walking and wading. We stayed for hours. I asked them, “Which is better, “the amusement park or the stream at the nature center?”

They hedged in giving their answer, knowing that their grandparents had gone to great effort on their behalf. But they conceded that the stream was at least even with the amusement park. (This particular afternoon at the stream pushed ahead of just about anything when I let the little Goofs eat in the car – something that in general Mama Goof forbids.)

The stream doesn’t even have to have water in it. On one of our regular trips to California to visit los abuelos we went on a short hike. The little Goofs whined constantly. Their expressions of disapproval alternated between asking why we had come to this desolate forsaken place and demanding a snack – punctuated by regular refusals to walk any farther due to exhaustion. The “hike” was on a paved path and less then a mile and a half. But on the way back, we walked through a dried out stream bed. All fatigue disappeared as they scampered among the rocks, finding interesting stones, animal shells, and other treasures that my wife and I would need to conveniently lose before our flight home.

Winter Wonderland
The other day, I pressed the kids into joining me on my walk through the wooded park. We came to a part of the stream that was frozen over. The little Goofs were fascinated. We threw rocks at the ice to see if we could break it (we couldn’t.) We walked on it tentatively. 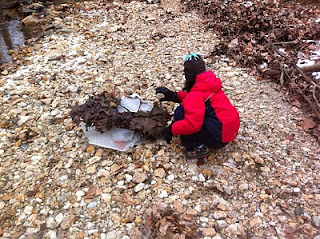 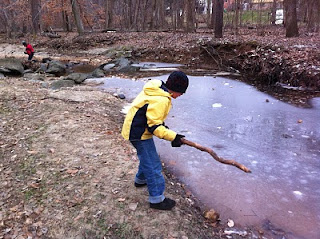 It was getting late. But the kids had brought headlamps we bought them for Hanukah (festival of lights!) and the woods weren’t scary at all. The next day, they demanded that I bring them back. So we returned. We made a real project out of trying to break the ice. We found big rocks and tossed them high into the air trying to puncture the surprisingly thick ice. We found a thin section the rocks could break through and watched the trapped air bubble up. But in many spots, the rocks just bounced off. GoofGirl wandered off and found isolated chunks of ice that she could pull out of the water. She built ice cairns on the side of the stream. We’ve since scheduled playdates where the highlight was a visit to the frozen part of the stream.

The best things in life are free, and are even better when they freeze.
Posted by Father Goof at 10:39 PM No comments:

The Wright Gift for the Man Who Has Everything

My father, PopGoof is about to turn 70!  This is an occasion deserving of a great gift, but my father has it all - a good career, a loving wife, his health, kids, and (most importantly) grandchildren to spoil.  What do you get for the man who has everything?

Over the summer I took the Little Goofs to the exhibitions-collections/exhibitions/lego-architecture.html>National Building Museum which was hosting an awesome LEGO exhibit. The exhibit featured skyscrapers built with LEGOs as well as enormous piles of blocks for building.  GoofBoy was in heaven and I found breaking up discarded buildings enormously satisfying.  GoofGirl was less than enthralled, but she and I explored the rest of the immense and immensely cool NBM.

When it was time to go GoofBoy wanted to buy something.  There were LEGO kits to build world famous skyscrapers and GoofBoy began to beg.  But most of the sets were less than 100 pieces - not much of a challenge.  Then I saw the LEGO Fallingwater set with 811 pieces.  My dad loves the architect Frank Lloyd Wright (on my brother's college tour he insisted on adding Bradley University to the agenda so we could see all of the Frank Lloyd Wright houses in Peoria, Illinois.)  He has visited Fallingwater many times.

An idea began to form, Fallingwater would be the perfect gift for the man who has everything.

"Buddy," I asked, "would you like to build this with Pop?"


"I want to build it with you when we get home!"


"Trust me, do this project with your Pop - make an old man happy."

GoofBoy hated waiting, but months later they built it together and it was awesome. 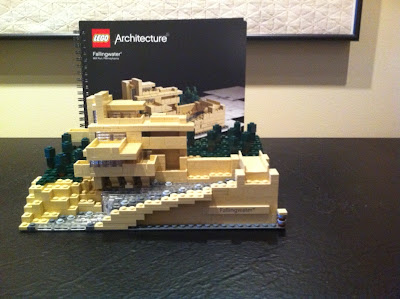 Posted by Father Goof at 9:41 PM No comments: