“Daddy, have you ever broken any bones?” GoofGirl is very interested in bones lately. So much so, that we’ve discussed buying a skeleton for her to study. But she is also afraid of monsters so a skeleton in the house would probably freak her out. (If we do buy her a skeleton is will be from anatomywarehouse.com - source for all your anatomical model needs. The picture is of the Flexible Mr. Thrifty with Spinal Nerves.)

“Well, I broke mommy’s ankle once…”

“WHAT! No way, mommy would have killed you.”

“It was an accident, we were walking together and she slipped on some ice.”

“That doesn’t count did you break any of your bones?”

“I broke your brother’s leg…”

“You are a bad daddy,” GoofGirl said, edging towards her light-sabre. I guess she planned to go down fighting.

“No, it was an accident. We were playing, he was just learning to walk, and he fell and a bone snapped. I felt terrible about it.”

GoofGirl rolled her eyes, “Have you ever broken and of your own bones?”

I was on a role and ignored her, “I broke Ian McKellan’s arm. Not Gandalf, just some kid in the neighborhood. We were 11 and our parents had told us not to wrestle, we weren’t going to. But they gave us the idea so we were playing super-stars of wrestling. He jumped off the couch and dropkicked me in the head. He bounced off and landed on his arm, breaking it! I won!!!”

“I don’t believe you daddy.”

“I don’t believe you won at wrestling. You can’t even defeat a little girl - it is time for a beat down!”

Update: Blogging at night, I forgot to put in a title!

It was terrible.
Posted by Father Goof at 9:09 PM No comments:

Father Goof has not been blogging much lately. I’d like to blame the kids for not being terribly amusing lately. But, that is probably because I’m not paying attention. The most likely culprit is yours truly’s own lack of discipline, organization, and just basic time management. But I choose to blame the Jewish holidays. Starting with Rosh Hashanah about a month ago there have been six Jewish holidays that have fallen on weekdays this year – I don’t work (which includes anything on the computer, or writing, or driving) on those days. Plus, they came the day before Shabbat – another day on which I don’t work. Finally, all of these days were preceded by days in which the little Goofs’ Jewish Day School was closed (so teachers could travel for the holidays.) So for the last month I’ve needed to pack four weeks of work into two weeks. I enjoy a super-flexible schedule, but work does need to get done occasionally.

The truly inspired bloggers such as my Stakhanovite friend at Not Ever Still manage to just keep cranking out the cute and amusing despite these challenges. But I just didn’t have it in me.

The Jewish holidays are viewed as a time of personal spiritual growth – but I don’t know exactly what that means. I am observant, but not spiritual – I get no deep thrill as pray. Anyway, Judaism is a religion of doing, not of revelation. So I do. I go to services, I build a sukkah, and I fast on Yom Kippur.

I dream of one day having my life so organized that I can take the month off - not scheme how to fit in all my work and half resent the holidays’ intrusion into my life. But hear I am chasing a mirage, that’s not how life works. 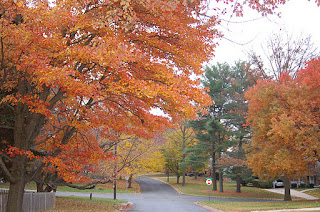 Towards the end my boss asked me to go to a meeting on one of the holidays. Of course, I had the option of saying no – he knew it was an imposition. But by the end of the cycle, I am usually ready to call it quits. When he thanked me for coming in, I told him I was going out of my mind not being able to work. I understand, spiritually that refraining from “acquisition” is important. But my work is more than a living; it is often fun and satisfying.

My boss observed that the nice thing about these holidays is that it creates family time, from time that would have been devoured by day-to-day concerns. He isn’t the boss for nothing.

We didn’t do anything particularly special. We visited friends and were visited by others. GoofBoy has learned to read from the Torah and did so during services (a full three years before his Bar Mitzvah) – yet another thing he can do that I can’t! But between not driving and the driving rain we didn’t have any real adventures. We just bummed around. MamaGoof and GoofBoy played board games. GoofGirl and I played “Battleship” (she kept knowingly hitting the same coordinates, possibly believing my ships could move.) I read Dave Barry out loud (wonderful hearing the little Goofs laughing to jokes about the 2000 election!) GoofGirl read “Fashion Kitty” to me. When the kids got bored, our fallback was to wrestle.

It wasn’t quality time or special time. It was just time.

Thousands of years ago, ancient Jews sacrificed livestock on the great festivals. This was the most valuable thing they owned – it was food that could transport itself: an exceptional thing in a pre-industrial society. Now we sacrifice our time, because in the end what else do we have?
Posted by Father Goof at 1:10 PM 1 comment:

Vignettes of GoofBoy - A Great Son

Most of what I've been writing about GoofBoy lately has been negative - not about him - but about his challenges (and frustrations) with fifth grade. But I wouldn't want to give the impression that being his dad is without rewards. Almost every day he does something incredible.

GoofBoy read the Orson Scott Card classic Ender’s Game recently. This is a great book, really miles ahead of Harry Potter as literature - and I don’t say that lightly, I like Harry Potter.

He knew he wanted to read it, but he was afraid to ask me because it had bad words. I responded, “I know you know all the bad words. You can read books that use them, but I don’t want YOU to use them.”

The book blew him away. I remember going to his room during the weekend he read it. He looked up at me and said, “Dad, I just don’t want to do anything but read this book.”

Unfortunately it was a bit too good. He can’t get into anything else. He started the sequel to Ender’s Game but it was a bit too advanced. He went back to a young adult series he had been reading and it was just too lightweight.

We had a little boy over, he is about half of GoofBoy’s age, but GoofBoy loves him. It was rainy, so they stayed inside, chasing each other around the house shooting each other with Nerf Guns. I noticed as they were playing that the little boy had on the Nerf safety glasses.

“Buddy,” I told GoofBoy, “Good job, you remembered to have your playmate put on the safety glasses without my telling you.”

“Dad, I wouldn’t want him to get hurt cause then they might not let him come over again.”

“That’s very responsible of you.”

GoofBoy grinned, “And now I can aim for his eyes!”

For Jewish holidays the little Goofs have been home a lot and there are no electronics for us on those days. So GoofGirl was getting a little bored and MamaGoof and I needed a naps (drinking wine to celebrate our holidays is tradition).

GoofBoy rose to the occasion. He sat on the floor, pulled his sister into his lap and told her stories – stories he just made up. Unsurprisingly, they were action stories, and GoofBoy bounced and tossed his sister to enliven the drama.

When I finally got up, I told GoofBoy how helpful he had been and said that the bouncing in his lap made his stories like a ride at Disneyland. 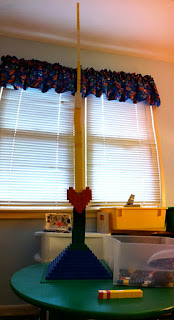 That a boy would build a model of the Empire State Building with Legos is no surprise. But the little valentine was an odd touch, so I asked GoofBoy about it.

He explained, “I added the heart on September 11th.”
Posted by Father Goof at 10:53 PM No comments: