Dronies - A Dad Goes to BronyCon

As we were driving to Baltimore THE Harry Chapin song came on. The one that brings a tear and wave of regret to every parent:


And the cats in the cradle and the silver spoon

Little boy blue and the man in the moon

When you comin' home, Dad, I don't know when

But we'll get together then

You know we'll have a good time then

Except for one thing, I was driving my daughter to BronyCon. I have NOTHING to apologize for. If my children don’t get the level of attention they want from me it is because they are insatiable timesucks - not because I ignore them. 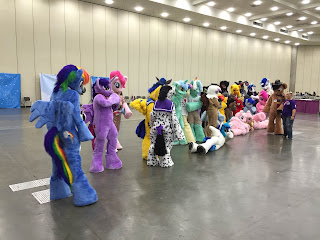 BronyCon is probably pretty interesting. My daughter loves the edgy reboot of a once insipid animated series. For an animated kids show about magic ponies, My Little Pony is really good. There is a vast, fleshed out multi-verse, smart references to culture, and interesting characters. It is so good that “Cons” are held where people can dress up in costumes, make music inspired by the series, and talk endlessly about it. It is SO good that young men have taken to it and are fans (hence the appellation “brony” - bros who like My Little Pony.) 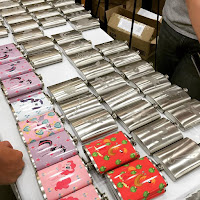 One’s first thought would have to be that these guys are maybe just a little off - but that is unfair. They may be weird - but hell so was I at their age (and probably still am). But there is an important distinction between weird and creepy. A distinction I’ve been trying to teach GoofGirl, with limited success.

I’ve enjoyed watching a lot of gender barriers shrink and fall. GoofGirl plays with Legos - I don’t remember any girls playing with Legos ever when I was kid (in fairness, I don’t remember a lot of girls.) I remember at some point in my 20s a friend of mine asking me, “When did it become ok to talk about Star Trek around women?” But it had and it was great!

I guess I’m a little worried that girls finally have this really cool thing, so naturally guys will jump all over it and make it their own. But I probably don’t need to worry too much. These girls (and women) aren’t exactly pushovers!

That being said BronyCon itself didn’t do much for yours truly. GoofGirl spent a day with some other girls, chaperoned by a friend (THANKS!). I joined on Sunday. I went to science fiction conventions as a kid, I know the drill. Panels, autographs, people in costumes, and an exhibit hall with a vast range of stuff to buy.

GoofGirl likes to shop, so we spent a LOT of time in the vendors hall as she agonized over what to buy. I put the kibosh on the $75 Princess Luna. Canny GoofGirl had shown me a $300 one and firmly declared she wasn’t interested before taking me to the one she wanted. Good try.

Sorry, but there are limits. I acquisced to a $12 Fluttershy needed to keep GoofGirl’s current Princess Luna company - although I think Fluttershy, who is very shy, is not such great company. (Wow - I’ve retained something from her hours of plot summaries - which are often longer than the actual show.)

My preferences are Pinkie Pie because she is easily identifiable and her name is alliterative. But I’ve come around to Apple Jack who runs an apple farm and brews cider. They pony world (Equestria) is not without merit.

We attended a panel about how to make your own pony plushies. GoofGirl was fascinated - I learned that the ears are harder than you'd think.

I was not alone, there was a fair spattering of middle-aged guys who were not bronies, gamely following their little girls around the conventions. We weren't really bronies - we were dronies.

DroneyCon
That's where the hip flask could come in handy. Or better, the next BronyCon could accommodate our needs and maybe set up a bar for us. If they played My Little Pony Episodes while we drank we could really get into it. Maybe, when the full sentiment and decency hit us, as we were deep in our cups of Applejack's handiwork. I have a vision of us drones huddling together, sobbing on behalf of Rarity or Rainbow Dash.

I can see our daughters finding us and nodding sadly and telling us, "Daddy, just because it is ok for boys to cry now doesn't mean they have to."
Posted by Father Goof at 10:38 PM No comments: