The folks at philosophy make some wonderful products. We’ve been washing the kids with various shampoos that smell like chocolate, oatmeal raisin, and snickerdoodle. Having a daughter that smells like cookies is a huge challenge for a dad already inclined to chewing on his progeny.

Washing her hair tonight, I was less attentive than I should have been and some dribbled into her eyes. Naturally she cried. I felt pretty bad, but I couldn’t believe that something that smelled so good could hurt anyone.

My wife helpfully pointed out the flaw in my logic by observing that jabbing an oatmeal raisin cookie into your eye would also hurt.
Posted by Father Goof at 1:06 AM No comments: 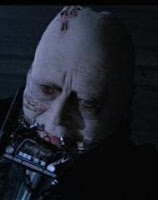 Yesterday, I couldn’t think – all day. I had the strangest headache. Neither drugs nor naps helped.

Then I noticed that my arms were sunburned. It must have happened while watching my son’s football practice. The unprotected tip of my head must have gotten some sunburn too. When I showed it to my son, he was impressed, saying it looked like Darth Vader’s head underneath his helmet.

Cool. A small consolation for an unpleasant headache.

Thankfully, I also found the cure. To soothe my crisped scalp I rubbed on a bit of olive oil – thanks George Costanza.
Posted by Father Goof at 10:28 PM 1 comment:

My son and my brother share a bond. They were born on the same day and have innumerable similarities (such as an interest in watching and playing sports) not shared with me. This proves yet again that the Almighty has a great sense of humor. I was a terrible big brother, beyond the tormenting typical of big brothers I was fundamentally opposed to his existence – I had lobbied for a dog. My father was allergic to dogs. I countered (throughout my childhood) that I was allergic to my brother. In my son I am getting the chance to right my ancient wrongs. He is the little brother I always wanted.

My son had seen two of the three original Star Wars movies. My brother and I had discussed meeting at his place near Philly to watch one of the movies on his big-screen TV – but plans kept falling through (my brother is handicapped with having a regular job). The whole thing was looking less and less likely as my brother will soon have a child of his own. But then I checked my calendar and saw my son’s school was closed last Monday.*

Daddy, Where are we going?
I called my brother and everything worked. I decided to surprise my son.

So, Sunday afternoon I surreptitiously loaded the car, and told my son to come join me for a couple of errands. We put on a CD of Harry Potter and The Order of the Phoenix on and began driving. After about an hour, he asked me where we were going? I told him, “Some errands.”

We stopped at a rest stop, where I bought him the forbidden elixir – Coca-Cola. I said, “Here it is! Isn’t this cool, all these restaurants and shops, right on the highway?”

“Yeah, it is neat,” he answered, “Is this really where we are going?”

“Get back in the car.” Events at Hogwarts continued to unfold.

Half an hour later he asked if we were heading home yet. No, we hadn’t done any errands. A little after that he asked again, “Daddy, where are we going?”

I told him to look at the highway signs. Harry Potter’s battle against Voldemort continued.

We passed under a highway sign directing us to Philadelphia and everything clicked. My the little Goof put it together instantly yelling, “We are going to my uncle’s house to watch Return of the Jedi!”

The Main Event – WARNING: Plot Spoilers Ahead
We had pizza and age appropriate drinks and watched favorite scenes from the first two movies. Then we sat down and watched. My son loved it, no boring parts – every scene, he said, had a battle. I asked, “What about when Yoda died?”

My brother chimed in, “He was fighting for his life.”

Although they were criticized by some of my more cynical friends as “teddy bears with guns,” my son loved the Ewoks – probably because they were in fact teddy bears with guns. It occurred to me that a great deal of planning must have gone into the Ewok attack on the Storm Troopers, giant log traps and catapults don’t just build themselves.

Archetypal Voyage Home
The next day it was too rainy to enjoy most of the proximate historical sites, and we had to get home in time to pick up my daughter from daycare. We did stumble upon a local sports museum – teaching my son a cardinal rule of road trips – it isn’t about the destination, it is about what you find on the way.

We spent the morning and afternoon driving home listening to more Harry Potter. I would occasionally stop the story and make a few points.

“When they use the pain curse on Harry Potter, isn’t that just like when the Emperor used the Force lightning on Luke?”

“Isn’t what Dumbledore is telling Harry just like what Obi-Wan told Luke?”

“Daaad, enough about archetypes – can’t we just listen to the story?”

*My son’s school is but another illustration of the maxim, the more expensive the school the more often they close. I understand closing for Jewish holidays – it is a Jewish day school. But they also have a lot of professional days – aka three-day weekends.
Posted by Father Goof at 3:10 PM No comments:

Thank you for Bea

While my wife doesn't like it, she got used to my "interest" in certain celebrities. But what really weirded her out was how often I mentioned Bea Arthur. I argued it was comedy, she was always a good punchline. But just like my wife knew that calling Maura Tierney “talented” meant so much more, she wondered and worried why I was always bringing up Bea Arthur and what was wrong with me.

Why would any GUY make regular references to The Golden Girls - what kind of bizarre, Harold & Maude type fixation did I have? And worse, why did I sometimes sing the theme song in the shower? (OK – first, it’s catchy and second, in fairness, I'm Jewish but sing Christmas carols in the shower year round.)

With Ms. Arthur's passing, half of our cable channels have been running Golden Girls' marathons and my wife mocked me until I sat down with her and watched an episode. Here's the thing - it was really funny. The writing was strong, and the lines were delivered impeccably. Here was a show with four talented actresses at the top of their game having a great time. As a reference point, we happened to catch an old episode of St. Elsewhere (the ER of the 1980s), featuring a very young Denzel Washington. The show had not aged well at all – it was barely watchable.

There is no way around it, Bea Arthur was GOOD. It is no small thing for a middle-aged woman to burst onto TV and become the hot thing. Bea Arthur did it after a striking appearance on All in the Family (true she was a highly regarded stage actress at that point). She got her own show, Maude and then another, The Golden Girls.

Arthur developed her persona, at least in part, because people found her height off-putting. As the father of a daughter who is (based on current projections) going to be about 9 feet tall, I am glad Bea Arthur helped make room for big women with big talent and personalities. We see so far only because we stand on the shoulders of giants - and my daughter should see and go very far!
Posted by Father Goof at 9:54 PM No comments:

This afternoon, I picked up my daughter and 3C from pre-school. As they settled into their car seats they each picked up a book and began flipping through. Goof girl said, “Do you want to look at Cinderella? Well you can’t, I’m looking at it.”

Naturally I rebuked my daughter and told her that was no way to talk to a friend and that she should share the book.

“I can’t help it,” my daughter explained, “I’m like the wicked step-sisters.”

“The step-sisters are awful – you don’t want to be like them.”

“No,” I retorted, “they aren’t. And more importantly, they aren’t nice. Being nice is really important.”

“They are more beautiful at the beginning. They get the nice clothes and jewelry…”

She’s always liked the bad guys – from Robby Rotten to the White Witch in Narnia. But identifying with the wicked stepsisters in Cinderella? Is there a feminist take on this? I mean, at least her identity isn’t wrapped up in seeking a handsome prince?

Or is my daughter, as I’ve always suspected, possessed?
Posted by Father Goof at 12:57 AM No comments: