I lead my life like a self-aware character in a sitcom who occasionally steps out of his role and addresses an invisible crowd.  I am sharing a series of long complex jokes between myself and this imaginary audience.  I recognize this is very weird, and perhaps this blog does a bit to normalize things.

As a consequence, my conversations with my children are peppered with references to things they cannot possibly get.  They don't ask me to explain, possibly because I make it so boring or they have just gotten used to me.

We recently saw the movie Parental Guidance.  Without giving anything away the radio broadcast of the shot heard round the world from the 1951 Dodgers-Giants playoff figures prominently in the movie.  Going into the bottom of the ninth, Giant Bobby Thomson hits a homerun to win the game for his team, it is a big upset and announcer Russ Hodges yells excitedly, "THE GIANTS WIN THE PENNANT! THE GIANTS WIN THE PENNANT!" (Here's a link to the clip.)

I am in the habit of yelling that whenever the little Goofs accomplish anything.  For example:

After seeing Parental Guidance GoofBoy said, "So that's why you are always yelling that thing about the Giants!"

Recently GoofBoy was home sick and, thanks to AmazonPrime, he began working his way through the old Star Treks.  He watched the episode The Gamesters of Triskelion, in which Captain Kirk is forced to fight aliens in an arena. While he battles in the arena some distinctive dramatic music plays and one of the alien spectators says to another, "I'll wager 300 qatloos on the newcomer."  This clip from the Simpsons pretty much covers it.

After seeing the episode, GoofBoy turned to MamaGoof in wonder, "So that's why Daddy always starts humming that music before we wrestle!  And that's why, whenever I start battling my sister he says the thing about the Qatloos."

I know it isn't age appropriate, but I really want to be there with them when they see Silence of the Lambs and realize the reference I was making when, during bath-time, I urged them to apply lotion.

I may not be a very good person, but I hope my imaginary audience is enjoying the show.

How to Talk about the Petraeus Affair with Your Children

As we watched the inauguration, as Obama, Biden and their wives prepared to review the troops, GoofGirl asked, "Who's that?" referring to the uniformed figure accompanying them.

"That's the Chairman of the Joint Chiefs of Staff," I answered.

"He was, he still is but he's retired," I explained.

"Wasn't there a controversy with him?" GoofBoy asked.

"Yes, he was having an affair," I answered neutrally.

"He was married and dating a woman who wasn't his wife," I stated, carefully.

"Daddy," GoofGirl "Are you having an affair?"

"No, of course not, I love mommy, why do you think that?"

"You are always talking about going to lunch with people and a lot of them are women.  And you talk to them messages on Facebook. So are you dating them?"

"But mi nina, I tell mommy about all of that.  I'm not hiding it from her, these are just friends.  Do you understand?"

Ugh, shouldn't have ended with the question, now she'll want to know more.

"I understand, but Daddy, I don't think you should tell mommy about all of it."

"Because mommy thinks it's all pretty boring."

GoofBoy and CarpoolBuddy were so ecstatic that the Ravens won that they quite literally danced with joy.

By the way, this is the thing they were dancing to (it has 3 million hits on YouTube):

When dropping off CarpoolBuddy, I told CarpoolDad how relieved I was that the Ravens had won, that I could not have handled the GoofBoy's depths of despair (last year, after the missed field goal, he tried to start a new life under the dining room table.)

CarpoolDad observed that now the stakes are even higher, so if the Ravens lose he will be even more upset than he was last year.

"Oh no, I'm sure my son will be philosophical about it if the Ravens were to lose in the SuperBowl.  He'd recognize that even making it to the SuperBowl is such an honor and that they had such a great season that it wouldn't bother him so much."

Then we both had a good, long laugh.
Posted by Father Goof at 12:50 AM No comments:

Watership Down Review: A Bunny Tail with Meat


"Hey guys, want to listen to a story about bunnies?" I asked the Little Goofs.

They agreed and we started listening to Watership Down. 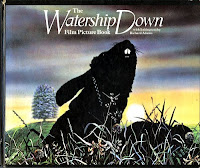 I had read it when I was in 7th grade, just a year older than GoofBoy and had liked it.

But, unsurprisingly, I didn't realize what an incredible work it was.  It is the story of a band of rabbits who, following a premonition that something bad was going to happen, leave their warren and set off to found a new one.  On the way they have many adventures dealing with other animals, people, nature, and other communities of rabbits.

The rabbits have a society, but they are still rabbits.  When a bird tells them about the ocean they cannot conceive of it and the concept of a boat is a profound innovation.  They have no understanding of what human beings do and their numerals are one, two, three, four, and a great many.

What I did not appreciate when I was 12 was how the author, Richard Adams, creates a rabbit mythology and world that absorbs the reader.  The rabbits tell each other stories about their great hero El-ahrairah who through cunning and tricks always bests the elil (enemies of rabbits.)  These stories inspire the rabbits to develop clever solutions to their own challenges throughout the story.  The addition of a rabbit vocabulary really brought the story to life.  At one point, when GoofBoy was hungry he announced, "Dad, can I silflay (lapine for "to feed outside")?

GoofGirl joined in, "Dad, I need to make hraka (droppings)."

And we began referring to the motor vehicles by the rabbit term, "hrududu."

The whole book serves as an allegory about politics and society.  At the heart of the rabbits' struggle was their conflict with a bigger warren of rabbits run by the tyrannical General Woundwort - an enormous and strong rabbit.  The attitudes of the rabbits under his rule bring to life how totalitarianism works and shapes lives and feelings.

The characters are sharply drawn and engaging.  GoofBoy and I have had several debates about the virtues of Bigwig and Captain Holly - a pair of brave rabbit heroes.  The action scenes are exciting.  During the giant battle at the end, GoofBoy could hardly sit still.  I mentioned to GoofBoy that Adams, like so many men of his generation had served in World War II and this informed his presentation of the action.  In fact, Adams says that several of the main characters are based on his comrades from his squadron during the war.

One downside was that it might have been just a bit over GoofGirl's head.  She certainly got parts of it, and she complained about not understanding the reader's English accent (although she had no trouble with Jim Dale, the reader of the Harry Potter series.)  So be it, Watership Down is a challenging book.  A bunny story for almost all ages.

Posted by Father Goof at 3:29 PM No comments:

Rubbing off the Pigskin

There are a lot of things that regular people - the vast majority of people - do, that I just don't.  I've mentioned before my inability to even express polite interest in music.  Another one is football, don't care not interested, moving along.  To be honest I am not completely clear on the rules - beyond the fact that it is a sophisticated version of the game I used to play with my brother: "get past me."  This game was extra fun on the stairs, because it drove BubbeGoof crazy - she thought one of us would fall to the floor and crack open our skulls.  From our perspective, this  was, of course, the entire point.

GoofBoy however is obsessed with football.  When he was little, he and Carpool Buddy, bored at a party for grown-ups went outside to run plays.  They didn't have a ball, they just pretended.  I mentioned to CarpoolDad that I had a football in my car, but he just said, "Let's see how long they'll go without a ball."

All afternoon it turned out.

When we go to restaurants, if a football game is on GoofBoy will head over to the bar and talk sports with the bartender and any other patrons.  He is 11.

My primary interest in football revolves around stories about Art Donovan eating (in the 1950s eating 30 hotdogs was part of training) and insisting that if I had been governor of Maryland in 1984 (unlikely since I was 13) I would have mobilized the Maryland National Guard and invaded Indiana.

I do root for the Ravens, because when they lose GoofBoy is inconsolable.  He is sad for his team and terrified of the merciless torment he will take at school the next day, where his math teacher is a Steelers fan and most of his classmates are Redskins fans.  (Have I mentioned he goes to Jewish day school where the quality of the hazing is, to say the least, sub-par?)

But he is my son and I am a loyal dad, so I try.  I've watched games with him just to keep him company, and even taken him to games.  Here is the thing, it has rubbed off.  His endless discourses on plays and players have given me a basic awareness of the game.

At a meeting recently, when talked shifted away from the matters at hand, everyone talked about football.  Normally in these circumstances I drift off and think about vice presidents, but somehow was caught up in a group and made appropriate noises for at least five minutes.  I went home and thanked GoofBoy, he earned it and as a reward, I tried to look interested as he told me something about the evolution of some sort of back, possibly a player on the offensive line or maybe on the defense - not sure, I started thinking about vice presidents.
Posted by Father Goof at 10:01 PM No comments: