Mama Goof is cleaning the house for Pesach, and while I have been offering to help clean for weeks she has not even acknowledged my offer.  Normally, if I want to help, I just do the task.  MamaGoof assumes I will do "it" wrong (and she's probably right.)  But if I don't do it too wrong, than - as long as it is fait accompli - she tolerates it.  But I am bound to do Pesach cleaning incorrectly.  (Pesach is a Jewish holiday in which bread and a huge range of other foods are not consumed and the house must be cleaned thoroughly.)  MamaGoof knows that if Pesach cleaning is left to me I will thoroughly scrub the house with a flour-based cleanser thus necessitating that we burn our house to the ground (or at least she re-wash everything thoroughly.)

So the best thing I could do was take the children out of the house and leave MamaGoof in peace to scrub to her hearts content.

So I took them to a movie.  They unanimously agreed on Oz the Great and Powerful.  When they don't agree on things, I can usually manage to get my way on these things.  I was pushing for ZeroDarkThirty.  With its theme of the triumph of good over evil, plus a healthy dose of waterboarding I thought it was the perfect family movie (although GoofGirl might have gotten ideas.)  But the little Goofs were a solid majority voting block, so we were off to see the wizard...

It is visually incredible (especially in 3D) and very long (130 minutes.)  It isn't fair to call it spectacularly boring, but it is accurate to call it boringly spectacular.

There are some neat moments and, while I had my problems the kids loved it, and that's what's important.

But from my perspective, before we get to the odd and/or predictable plot points and constraints needed to make the story work, were my problems with the witches.  There were three (just like in MacBeth - but there the similarities end.)  They really annoyed me.  Rachel Weisz was ok.  Mila Kunis (who I generally like and enjoy seeing on the big or small screen) was unbearable.  Her tone, her words, just did not work for me.  Then Michelle Williams, who is also a fine actress, was yet another witch.  This might not have been her, but the dialogue she uttered was all wrong.  At one point she began a sentence by saying, "For the record..."

Young urban professionals in contemporary rom-coms might say this.

But do magical beings in fantasy worlds say "For the record"?  Especially when that fantasy world links to Kansas circa 1905?

That one sticks in my mind, but there were plenty of other anachronistic big-city screen-writer bits like that.

Also, when people were evil - they were ugly - always a good message.

Finally, there was an odd constraint in which the people of Oz - haha - could not kill.  Now where did that come from?  This forced a dramatic confrontation of illusion and fireworks.  (I mean, if you can make gunpowder for fireworks, you might have some other "kinetic" options.)

On the other hand, it was kind of fun and it amused the little Goofs.  What more can I really ask for?

A Pair of Great Books from Clare Vanderpool 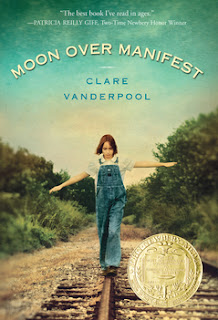 I was relieved to hear this.  On our drive home from an excursion to Philly we finished Watership Down.  I knew this would happen, so I had gotten a new book.  But we were out of Percy Jackson, Harry Potter, and the City of Ember - and the kids had started reading Lemony Snicket on their own.  So I just started poking around looking for something new.  I stumbled on the 2011 Newbery Award-winning Moon Over Manifest by Clare Vanderpool.  I guess Newbery Award should be enough of an endorsement, but I worried that it would be too precious, or without action the Goofs would be bored.

I needn't have worried at all.  Within moments of listening we were swept into the story (cynical Father Goof included!)

Set in the Depression it is about Abilene, a streetwise girl who had been riding the rails with her father when suddenly he sends her off to the town of Manifest where he had been raised.  She lives with the man who took in her father when he was a teenage drifter, discovers a cache of letters from almost two decades earlier.  The story moves back and forth between the narrator's present and the stories told by the letters, set during World War 1 and the Great Influenza.

Abilene, feeling that her father has sent her to Manifest to abandon her, begin exploring the town's past in order to learn who her father really is.

Moon Over Manifest is a nice change of pace from all of the fantasy and adventure.  There are fantastic, mysterious moments but the story is based in reality.  It is sad and sweet, with a history lesson thrown in.

In short, the little Goofs description was dead on.

Best of all, Ms. Vanderpool has another book, Navigating Early.  Another story of a young person feeling abandoned by his parents.  Set in Maine during World War 2' Jack 's mother in Kansas has died and his father is serving in the Navy.  Jack is sent to a boarding school in Maine where he falls in with the odd outcast Early who sees the number Pi as a story.  Over a school break, Jack joins Early on a quest through Maine's deep woods.  We are still in the middle, but, while completely real, Navigating Early also has a magical, mythical quality to it. 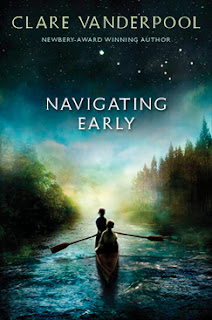 The little Goofs say Navigating Early is even better than Moon Over Manifest.  I say, why choose.
Posted by Father Goof at 11:20 PM No comments: