Turkey has been eaten, football has been watched, and drinks have been spilled. Thanksgiving is winding down and I thought I'd take a minute to think about the things for which I'm grateful.

Obviously there are the big things - my freedom from want, my safety and health, my two great kids, and being married to MamaGoof. These are all big things, I should be grateful for them every day (although sometimes I forget.)

Good Guidance Counselors
The little Goofs are sensitive kids who are good at discussing their feelings and troubles. On the whole, this serves them well. If you can discuss it, you can process it, and not let it consume you. (Not that the little Goofs are particularly troubled, but they get upset and anxious - just like any normal person.)

But sometimes it is a bit much for me (and I'm not always helpful).

I try to listen, express concern, and be helpful. But I have my limits. I don't want to discourage this positive (really wonderful) tendency, but sometimes I'm out of gas and just can't give them the attention they deserve.

Fortunately, their school has terrific guidance counselors. Knowing that the burden of listening and absorbing their troubles is not completely on my shoulders is a huge relief. I always want them to tell me what's up, but I almost always also recommend that they talk to the guidance counselors.

No Football
GoofBoy really, really likes football. A LOT! If his school had a football team, he would play on it. Unfortunately, football is an excellent way to acquire concussions. As much as GoofBoy loves to play pretty much every game that exists, genetics ensures that he will not be terribly good (better than I ever was, but not scholarship material.) He is going to make his living off of his brains, and i would just as soon they not be rattled.

Fortunately, I don't have to order no football. His school doesn't have a team, so there is no issue.

Built in Baby-Sitting
GoofBoy is 13. Under Jewish law he is now a man, more importantly under state law he is old enough to stay home and mind his sister. (At 10 she really doesn't need his minding, and in fact she looks after him.) MamaGoof and I are free to go out on weekend nights - or really anytime we want. We have taken advantage of this some, and we will do so even MORE! We can go out to eat, to the movies, whatever we want. We frankly have no idea what to do with our freedom - but we'll learn.

When we leave them, they carefully plan attack strategies should there be an intruder. They array traps and weapons around the house. We live in boring suburbs, but it amuses them.

Sibling Affection
And that brings me to the final little things for which I am grateful. My kids get along. I don't have to worry that if we go out the kids will fight all night. More importantly, it means for a quieter house, the two of them aren't yelling at each other all the time.

To me this is remarkable because based on the relationship my brother and I had, I did not know this was possible. That being said, I wouldn't settle their squabbles. I'd probably just let them fight it out. But, I do appreciate the quiet and that they help each other out.

So those are my small blessings. Think about yours.
Posted by Father Goof at 10:25 PM No comments:

GoofGirl on the Gridiron

GoofBoy is obsessed with sports. He runs track and plays baseball. But I am constantly amazed at the depth of his sports knowledge. I know he lives and breathes NFL (he is in approximately 200 fantasy leagues). He also likes baseball. But somehow he is also up on hockey and even University of Maryland sports. I work there and have no idea what the teams are up to.

But GoofGirl, while a big strong girl, has not had quite the affinity for sports. Although in fairness, I think I haven't been as pro-active in finding her team sport activities. (With her brother it was easy, since all of his friends were on teams, most of her friends were not.) But she goes back and forth. She says she'd like to play, but at camp when she was on a team she opted to be a cheerleader instead. (I don't care if she plays sports or not, but I could do without her being a cheerleader.)

But then I hear about PE (the teachers get upset when we call it gym.) She had a dispute with the teacher because she wasn't with her preferred group. She explained, they were playing football. The class divided into a competitive group and a more casual group. The former was all boys and the latter was mostly girls (although I think I would have been in the latter if only that option had existed when I was 10.)

Turns out, she was a real asset. She is still taller than all the boys and thus excelled at defense, knocking down passes. But best of all, she scored a touchdown. The other team didn't guard her, since she was a girl. So they planned play where they passed to her and - TOUCHDOWN!

(GoofBoy gets partial credit, somehow his obsession has leaked into her by osmosis.)

I am very pleased with GoofGirl's academics, and that is what is really important. But somehow, against my better judgment, I am absurdly proud of everything about her football exploits.
Posted by Father Goof at 12:11 AM No comments:

Pelicula Attack or Why I don't speak Spanish

The other day, GoofBoy was visiting the Carpool Clan and he kept saying, “I’m so hungry, I wish there was a big plate of fried molcajete to eat.”

“I know,” GoofBoy answered cheerfully, “But my dad loves the way the word sounds so he keeps saying things like that to make my mom crazy.”

Every adult present laughed because – well – they know me.

MamaGoof is a fluent Spanish speaker and yet somehow, despite over 20 years together, I haven’t managed to learn Spanish. It is possible that I am a few scoops short of a sundae. There is plenty of evidence for this theory, but I think MamaGoof has incentives to prevent me from becoming bilingual. 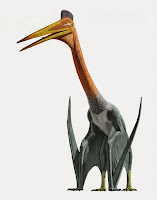 I fall in love with the sound of words, like película. That is the Spanish word for movie. But MamaGoof at the instant she taught me the word, realized to her endless regret, that as soon as I heard it I envisioned a huge pelican with fangs.

(The attached pictures that capture what I see in my head when I hear the word pelicula come from a neat Washington Post article about ancient flying vertebrates and a neat sight called called Kids Dig Dinos - visit them if you actually want to learn something rather than reading my drivel.)

“Aiii! It is el película!” I would scream in terror or, “You know what would be a great película? El Película vs. El Chupácabra!”

The salt in this linguistic wound is of course that película is feminine, so I should, properly, be yelling “¡la película!” in terror (which might be appropriate when we sit down to watch the next Sharknado.)

¡Yo quiero un oso blanco! (I want a polar bear.)

¿Dónde está el burro? (Where is the donkey?)

¡Yo quiero comer el molcajete! (I want to eat the molcajete!)

As it happens I do speak a bit of Spanish – enough to communicate with children and surprise people. Once when GoofGirl was an infant, we were shopping and MamaGoof headed down an aisle to find something. I stayed along the side with GoofGirl and the cart. A wizened Latino saw my little girl and came up to her and grinned – just looking (a sentiment I certainly understood).

His eyes grew huge and he jumped back, exclaiming, “¡El blanco!”

I also issue basic commands to my children in Spanish. One afternoon, while the little Goofs were over at Carpool Clan manor (notice how many of these stories start this way), Carpool Gal asked if I really knew any Spanish.

GoofBoy dutifully looked up, “Nothing dad, just playing. CarpoolGal was unimpressed, “That’s it?” she asked.

Summoned, GoofBoy ran up to me, “What’s up dad?”

GoofBoy, at the other end of the yard looked up, shocked, “Dad, I’m not doing anything! Really!”

But not too much, and that’s just the way MamaGoof wants to keep it.
Posted by Father Goof at 9:48 PM No comments: