GoofGirl generally has little girls over and they do girl things, like play family. She goes upstairs with her friend and closes the door so I am not privy to how the game goes. With some friends GoofGirl is mom, with others she is the sister. With her arch-rival, the devious 3C she is usually forced into the daughter role. The hierarchies are complicated and with the door closed I lack the data to map them.

But she still plays with boys (and her brother). Sometimes it is just general horsing around. But she also has a special buddy for particular forms of wackiness. In the car, on the way to his house she mutters to herself in strange deep voice.

"Nina, que haces?" (That's Spanish for, what are you doing - I speak Spanish at the level of a two year old.)

"I'm getting ready to play," she responds with a Cheshire grin.

When they get together, they discuss Guillotines a great deal.

I don't remember which one her friend choose, but he added as they headed upstairs, "Don't forget the sword!"

And they made a Lego Guillotine... 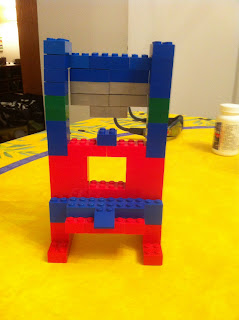