Kids (of all ages) Love Trucks!

Kids love trucks. They are big, they are loud are powerful. Trucks do stuff. They pick up garbage, lift people up high to fix things, and sometimes have sirens. Some are so big they can carry cars. Kids are small and often want to do these things but are not allowed. Kids love trucks. 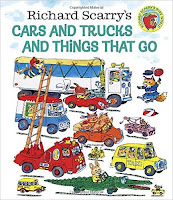 The daycare at my synagogue (where I sent the little Goofs back in the day) sponsors an annual day of Truck Touch! The parking is filled with trucks, and there is food, and activities. It is like a Richard Scarry book come to life. 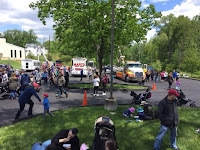 Naturally I volunteered to help. I proposed that I drive the dump truck. We would have a fire truck spray water and make a big mud puddle. Then I'd get all the kids in the back of the dump truck, drive them around, and dump them into the mud. Then we'd use the fire hoses to clean them up. Best of all, if any kids got hurt (unlikely, I know all about dump trucks, I've had a Tonka truck for over 40 years) there's an ambulance right there.

I kept pestering the nice young woman who organizes the event about this idea. (She already has two pre-school boys to wrangle, I really should leave her be - but occasionally I have to give MamaGoof a break from my madness.)

The little Goofs sent her emails:

Thanks so much for letting my dad drive the dump truck. He's so excited, it's all he's been talking about all week. He's been running around the house singing the dump truck song.

My proposal was not accepted, I was put on ticket sales (which I did diligently!) And about a million kids came and they all had a great time!

However, I did take some time off from my arduous back-breaking labor to SEE THE TRUCKS! I did (sort of) drive the trash truck. More importantly when one of the little boys I mentioned was disconsolate because he wasn't getting his turn at the wheel, I caught his eye and asked if he wanted to drive the coolest truck in the world. He nodded sadly - not believing in much of anything after being denied time in the drivers seat of a Ford F-150. I propped him up on my shoulders and let him grab my hair and drive. Not easy since I don't have much hair left. (GoofGirl pulled it all out sitting on my shoulders.)

So I didn't get to drive a truck, but really I did one better. I got to be a truck. And really, on some level, that's what every kid wants.

Posted by Father Goof at 7:09 AM No comments:

At my mother-in-law's funeral I met one of my wife's cousins. He was a very nice man and he kept in touch with his beloved aunt. When we met he knew all about me.

"I heard you wrote a book. Mama Lupe told me all about it." They called her Mama Lupe because, as the eldest daughter in an enormous family, a great deal of mothering was delegated to her.

My background was so very, very different from my mother-in-law. I had very little idea what, if anything, she understood about what I do. (It was not always clear to me that my own parents understood much about what I do either.) But apparently she got a lot more than I realized, and she was very proud.

After Mama died, my wife found a shopping bag candy in her room, and candies in her mother's handbag and the pockets of her clothes. My mother-in-law really should not have been eating bags of candy. Mama's sweet tooth was a well-established fact. When my wife mentioned this to her sister who lived closer by, her sister explained that Mama wasn't eating the candy herself. She was handing it out when she went shopping.

Once, my sister-in-law reported, they were on a shopping trip together and Mama had been giving candy to all of the greeters and stock clerks and cashiers. As she was leaving a store, one worker jokingly called out, "What, no candy for me?"

Mama was not moving so easily. But she bustled back to make sure the store clerk got his dose of sweetness.

The first time I visited my wife's parents in LA, Mama went to the kitchen to prepare dinner. This was a great honor; most of the cooking was done by Nana at this point. But for the great guest (me) all the stops were pulled out. Then I heard the banging. The future MamaGoof (FMG) explained to me, "She is tenderizing the meat with a hammer. It's gonna be good!"

And so it was.

But I also got the message. Be good to this woman and her family, because she knows how to use a hammer.

We'd actually met some time before, at the FMG's PhD graduation. It happened to be the day of death for Rebbe MenachemSchneerson, who some believed was the Messiah of the Jewish people (there's a whole, whole lot of theology tied up in here.) Mama who monitored world affairs from her couch knew everything going on the world and knowing I was Jewish informed me, "Your Messiah died."

"I'd better get my instructions!" I joked and started to get up from the breakfast table.

She laughed, I'd passed a test. She was a devout Catholic herself, but more than willing to be tolerant. But she was testing my character a little – fortunately I passed. 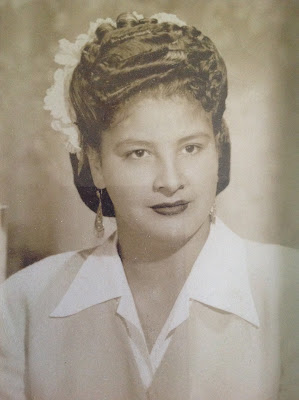 Mama was born in Guadalajara, one of 15, where her father was the foreman on a ranch. At a young age she was married off to an older man who wanted her to clean his hotel. She fled, made her way north and worked in the fields of central California for a few years. (This was the 1950s, immigration wasn’t an issue). It was a hard life. She worked as a housekeeper and as a seamstress. At the factory she became friends with a woman who had a brother.

Together they had four children and she managed the house, pinching pennies so they could all go to Catholic school (instead of LA public schools) where they all excelled (2 MDs, a PhD, and a dental hygienist – the American dream!) She was smart with her money, but also generous.

She loved being a grandmother. I mentioned how Mama cooked for me, but los ninos could have anything their little hearts desired – cookies, candy, fries (she hadn't cooked since the steaks I mentioned above).

Her husband and sister-in-law (Nana lived with them and they were like sisters) had difficult declining years. I’ve written about it before, and I am sad just thinking about it. But, after Nana left us and Papa was placed in a home where he got the care he needed, Mama seemed relaxed. We figured she was good for another decade of telenovelas and visits.

Unfortunately, that was not to be. My wife misses her Mama, the little Goofs miss their Abuelita, and I miss her too.
Posted by Father Goof at 6:31 PM No comments: