Yesterday, GoofBoy said some of the saddest words a little boy can say.

"Dad, I hope baseball practice is cancelled today. I just have so much homework to catch up on."

Well, sad words for a normal little boy that is. I begged my parents to let me play little league, and immediately hated it. First, I learned that despite what I had read left-handed people do not have natural curveballs. Also, an enormous knowledge of baseball history did not in fact translate to any prowess on the field. I was the worst player on a terrible team. Finally, the team had other children on it and I didn't much like other children.

But GoofBoy is very much a regular kid who loves playing ball, so to hear him not want to practice was a very sad. But homework has, quite suddenly, gotten very hard and GoofBoy worries terribly that he can't keep up.

MamaGoof and I recently took a little trip to Greece (I had a conference to attend - more on the trip later.) The little Goofs were left in the hands of my sister-in-law (best sister-in-law ever!) But GoofBoy had a homework crisis with Hebrew, which my sister-in-law simply doesn't know. So, in the shadow of the Acropolis, I sat at a coffeeshop where we Skyped with GoofBoy and calmed him down. Then we ordered another Nescafe, so I could keep using the free wifi and I arranged an emergency tutor. Because of the seven hour time difference, we had to stay up late and go to a coffeeshop with wifi to check in after-school on how everything went. Actually, in Athens this isn't hard, since the Greeks don't seem sleep (or maybe they do during the day at their jobs, it would explain a lot).

When we returned we managed to take care of the dreaded community service project. We decided to pick up garbage on the trail near our house. It was kind of fun, kind of strenuous, and after a bit more than an hour we had gathered a fair amount of trash. GoofBoy (and GoofGirl who joined us) actually can't wait to do it again. 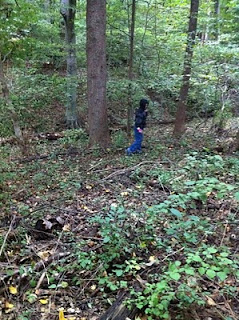 Of course we also had to run around and gather supplies and I'll need to go and have the pictures developed. I own two photo printers, both of which have come very close to being thrown out a window so I am not inclined to purchase a third. However, with all this driving I wonder if we have done more harm to the earth then help.

But GoofBoy's real source of stress is his Hebrew class. Attending a Jewish Day School, Hebrew language is a central part of the education and GoofBoy loves it - and works really hard at it. Besides the spiritual component of knowing the holy language, I am amazed at the skills he is developing to master the language. Last year, he was promoted to the advanced Hebrew class and had to work hard to keep up. He rose to the occasion. One night, while he was showering I heard him singing (it sounded like whale calls) - I was about to tell him to knock it off when I realized he was practicing his vocabulary. When he watches football, he usually has a sheet of vocabulary words with him to glance at during commercials.

He grasps the substance well, but he doesn't always get the form of the assignments. Last year, when told to write about chapter of the Torah (Pentateuch) in Hebrew in his own words, he actually attempted to re-write the chapter word for word - rather then summarize it. Now he is stressed because he has to deliver the dvar, that is a little lesson. on a chapter of Torah. This includes a summary, discussion of some specific lines he liked, and asking the class a series of questions - all in Hebrew. To prepare he wrote a summary in Hebrew, translated it into English as he told me what it said and was worried it wasn't good enough.

I was blown away, since I barely get by in English. I tried to tell him, that even doing a lousy job at this is pretty impressive. But he just worried that he would fail Hebrew. His diligence and devotion say really terrific things about him - but these regular homework meltdowns are going to make MamaGoof and I crazy.
Posted by Father Goof at 10:18 AM No comments:

Let me begin this rant by saying, I am obviously not a good person.

GoofBoy has been assigned a community service project and I view it primarily as a hassle for me.

As a student of politics (in the great sense of the word - affairs of the polis - being involved in the community) I am a great believe in volunteering and civil society. But walkin' the walk is another story.

Because here is the thing. His teacher says this is supposed to be self-directed, but GoofBoy is ten. He can't go anywhere without me. He has a very vague idea of what exists and goes on in this world. He'd like to maybe deliver toys to orphans on Tatooine or take care of abandoned house elves in Hogsmeade - but he has no clue how to even find animal shelters or nursing homes. Self-direction on this project is no direction.

So now it is another thing I have to do. I will need to identify a place and take him there. It will be on a Sunday. When I take him to birthday parties, I usually drop him off and head to a coffeeshop. But I can't drop him off at a nursing home/homeless shelter, nor can I hang around and just play Tetris on my phone.

I know how this must sound, I am complaining about doing good deeds. I like to think that I would do some volunteering, except that my schedule is sort of dominated by working and schlepping two kids around. I consider myself having done community service simply by not strangling anyone.

I know there are people with way more kids then me who find time to volunteer. Good for them, I'm not that good. I try (not that hard clearly) but I do try.

Am I glad that the school wants to inculcate the value of volunteering and helping others - of course. I won't mind our actual endeavor - I've spent plenty of time visiting nursing homes - but I simply cannot deny that my first reaction to the assignment was, "Great - something else to do."

And worse is coming, I think this year they do science fair.
Posted by Father Goof at 10:53 PM No comments:

Getting Dressed, Physics for the Morning

Recently I met the husband of an old college friend who is an honest-to-goodness rocket scientist. We had a fascinating discussion of what it takes to get a satellite to send signals to earth. The antenna had to be aligned towards earth, while the satellite’s solar panels had to be pointing at the sun. All of this had to occur while the satellite was orbiting the earth at high speeds. It is a complex multi-dimensional physics problem.

But it is nothing compared to GoofGirl getting dressed in the morning.

If the shoes don’t work with the shirt and pants… But she can’t change the shoes because she doesn’t like the laces on her other pair, which conflict with her hair (I don’t understand how this is possible, but I’m just a dad) – and her hair, which she hates by the way, is not being cooperative by still being brown and curly (because sometimes hair changes overnight apparently)…

She is only seven, way to young for this. I don’t even have the language to address this issue. Complex physics indeed, there are too many variable and I don’t understand any of them or how they interact. Mama Goof (who went to private schools that had uniforms) has no patience for it whatsoever.

I did what Dads do, and poked my head into her room every five minutes and told her to get dressed. This had little effect because analyzing clothes combinations is, from her perspective, part of the process of getting dressed. I respectfully disagree.

Mama Goof took a different approach, “Be dressed in two minutes or you wear this skirt and this shirt and that’s it.”

In two minutes GoofGirl was not dressed. Mama Goof began initiating the DefClothes sequence. GoofGirl begged, “Just let me explain, Mommy. Give me one more chance.”

MamaGoof would have none of it. She was right, of course.

I remember once as a kid I wasn’t getting dressed in the mornings (I didn’t care about my outfit, I think I just wanted to push BubbeGoof’s buttons.) One morning, when I wasn’t dressed in time for carpool, BubbeGoof waved the carpool away and left me alone in the house for hours even though I was only four years old. (I think you can be arrested for that now.) BubbeGoof insists she just drove around the block, but then she came back and pointedly ignored me all morning. I got dressed every pre-school morning since (although as an adult I have managed to develop a career where I spend a lot of time during the day sitting around in my pajamas.

This was the second day of school, and GoofGirl hasn’t given us any trouble since. Still, we would love it if our school adopted uniforms. Then GoofGirl could devote the freed up brain capacity to astrophysics.
Posted by Father Goof at 4:01 PM 1 comment: