I regret to say that the Goof clan did not do anything special for Veterans Day. There is no excuse. America’s veterans made great sacrifices to ensure the freedom that we enjoy every day. We didn’t even go to a Veterans Day sale – and truly our Veterans made their great sacrifices thinking that their children, and their children’s children could enjoy the opportunity to purchase discount mattresses and kitchenware.

But I did take the little Goofs to the bookfair at their school. Each of them was permitted to purchase two items. I didn’t look at their purchases carefully (it was the school bookfair, so I wasn’t really worried about the appropriateness of the material.)

But at bedtime, my daughter dropped her current book and had me read the new one, introducing me to Piper Reed: Navy Brat (by Kimberly Willis Holt). Piper’s dad is a Navy NCO who fixes jets and is called Chief. His family has to move a lot because that is the life of a navy family. And sometimes he has to go away for long stretches on ships. 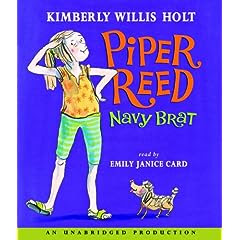 Goofgirl found this fascinating and asked if I could join the Navy and then we could live in different places, have adventures, and get a dog (because Piper has one.)

First and foremost, there is no military service that could make use of me – I am allergic to responsibility and require a lot of naps. But, putting that aside, I explained to Goofgirl, “If I were in the Navy I would have to go away on ships for a long time and you’d miss me.”

“No sweetheart. In the Navy, the daddies or the mommies go away on the ships for months. The kids don’t come because it can be dangerous. They are protecting us and sometimes to do that they have to go away for a long time.”

Her eyes got a little wide as it all sunk in. She didn’t know it was Veterans Day, but she did get an inkling of their sacrifices.

Meanwhile, Piper has taken her rightful place in the pantheon of my daughter’s literary heroes, next to Ramona, Junie B. Jones, Cam Jansen, and Judy Moody.
Posted by Father Goof at 11:05 PM No comments:

I was asking my son about an after-school activity. He hadn't been able to decide if he wanted to participate or not.

Finally, after a couple of days he told me he didn't want to do it.

"Because," GoofBoy explained, "It's on Thursday. That's the day of my easiest homework and I just like to finish it up and relax."

What a great answer. This is one wise kid.
Posted by Father Goof at 4:03 PM No comments:

As I put her to bed tonight my daughter cried miserably about tomorrow.

"But you do like school. You always tell me that. You are friends with everyone in your class and your teachers are really nice and love you."

"But you get to hangout with your friend 3C*."

"I know, but I don't like it how you do whatever CarpoolGirl tells you to do!"

"What does she tell me to do?

"She is always telling you to put on the air conditioning and you just do it for her! It isn't fair"

"Can I tell you a secret sweetheart. I tell CarpoolGirl I am doing it just to get her to be quiet. I don't really do it!"

"No - if you tell your friend she will tell her sister, that will ruin things. Let's just keep this our secret. Can you do that?"

"What if I whisper it?" she whispers.

Even though I haven't let her watch Seinfeld, she mimed putting something in her head and turning a key. So she doesn't get the concept of secret, but she gets "the vault?"

I need to find out what she's learning in kindergarten.


*Names are changed to protect the innocent. Our two kids are in a carpool with another family. GoofBoy and CarpoolBuddy have been friends since birth as have GoofGirl and 3C - CarpoolGal falls between her two siblings and thus has no one to talk to in carpool but me. Much of our conversation takes the form of orders.
Posted by Father Goof at 9:59 PM 2 comments:

Email ThisBlogThis!Share to TwitterShare to FacebookShare to Pinterest
Labels: carpool

A Quantum of Solace in the World Series

As a home of devoted Yankee-haters we are unhappy with the World Series outcome. But there is one small point of satisfaction. GoofBoy was becoming convinced that he was the cause of the losses. I let him stay up late and watch games 3 & 4. Through tears he told me, “Whenever I watch a game the team I root for loses, always, always!”

He blamed himself (he gets that habit from me.) I calmly told him that this was unreasonable. He began citing examples. He marshaled qualitative and quantitative data supporting his position. He noted the many instances of times when he rooted for the favored team and it lost, whereas when he made predictions about possible winners but did not watch the game he was very accurate. He had many specific examples going back for most of his life. The raw numbers were impressive and the findings were statistically significant.

The dad in me wanted to offer comfort, but the grad student in me was getting excited. What if my son were a living demonstration of the Heisenberg Uncertainty Principle who affected events just by observing them? Think of the groundbreaking research.

I tried to convince my son that this was a super-power.

“But dad…” he looked miserable.

“I know it’s a sacrifice, but that’s how it is with special powers. You think Spiderman has it easy, or Harry Potter, or Shazam?”

He had to go to bed early Monday night and the Phillies won. GoofBoy was pleased because it meant the Yankees lost, but it did nothing to relieve his concerns for his curse. He envisioned a long future of rooting for losers. I tried to console him with the lessons to be learned in loss. I told him how Toots Shor used to make his son watch the Mets because, “I want him to know life. It’s a history lesson. He’ll understand the depression.”

The cultural references were lost on him. Meanwhile visions of fellowships were dancing in my head.

Then the Phillies lost the series Wednesday night. He didn’t watch. The next morning when I told him, GoofBoy was pretty upset.

“Hey Buddy,” I explained, “Think on the bright side. You weren’t watching. They lost without you. It wasn’t because of you.”

GoofBoy looked at me gravely (well, as gravely as a little boy in spaceship pajamas can) and said, “I’m sorry dad.”

“Well, if I had the power to make teams lose by rooting for them, I would have learned to love the Yankees. I know you would have disowned me as your son for being a Yankees fan, but you would be so happy because then the Yankees would always lose.”

“It’s ok dad, I thought about what you said, about Spiderman. With great power comes great responsibility. If I could make the Yankees lose, then I have to do it.”

“But we’ve proven it buddy, you don’t have the power so don’t worry about it. A little boy shouldn’t have that much responsibility. Harry Potter only had to fight Voldemort – not the Bronx Bombers.”
Posted by Father Goof at 3:56 PM 2 comments: