I write lengthy, involved stories for the little Goofs when they go away to summer camp. Last year I wrote them a story about my deployment on a super-secret nuclear powered Coast Guard submarine ice-breaker that battled sea monsters. (Keep your eyes peeled - there's more of that coming as well!) The year before that I wrote to them about how their grandfather and I travelled to Japan to save the world - by eating sushi!

At some point last year I became entranced with the idea of a leopard detective. (I... um... think about animals in a whimsical way perhaps more than most adults. In the not so distant past, it was mostly cheetahs.) Leopard detective grew in my mind, I began to imagine his back-story. I talked about him incessantly. GoofGirl insisted he speak with a posh English accent. Finally, I just had to write it.

I knew, even before my phone rang, who it would be.

“Hey! Spots! We’ve got a live one, can you come in?” the familiar voice asked.

“Please tell me you want me to visit the crime scene. You know I have an extremely sensitive sense of smell and could undoubtedly detect something unknown to your forensic techs. Or perhaps you need me to carry out surveillance? I am designed to track prey…” 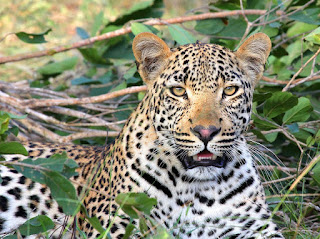 I always want to refuse, but I cannot. I am due to go home soon and need the money. I leapt down from my tree, leaving the deer I had killed stowed in the crook of the branch. There was still a bit more to eat. When my paws hit the ground, I let out a quiet chuff, a courtesy to let any animals nearby to stay clear. I would not be hunting tonight.

I padded quickly through Rock Creek Park, well away from the trails in case of any late night joggers or others who might visit the park in the small hours. I passed the strange sounds and smells of National Zoo. The world of humanity generates a cacophony of alien sounds and smells – far beyond what they, with their limited senses, realize. Yet it is the zoo, with its animals, some known to me but many alien, so intermingled with people, that I find it particularly disturbing. I try to give it a wide berth, but cannot when I am in a hurry. The southern terminus of the park is at the zoo, the closest point to the city morgue.

I began padding through the empty streets and alleys of the capital of the United States, carefully avoiding lights, hugging shadows. If I were not saving for a trip home, I might have just taken an Uber. Besides, the Detective-Sergeant would wait. He needed me just as much as I needed him.

At the city morgue I went to the side entrance. A few people know of me there, but not many, and texted my contact. In a few moments, Mohammed arrived. I was glad to see him. He is one of my very few friends in this city.

“Cheetah,” he said smiling, “I am glad you are here. There is a great mystery.”

My name is not cheetah, nor am I cheetah. Mohammed, a tech at the city morgue, was born to Masaai warriors in Kenya and knows this. But in Hindi my kind is often confused with the cheetah. It is a joke between us.

He led me to the inner sanctum, where the new corpses are stowed. I knew everyone, Detective-Sergeant Franklin, Detective Nguyen, and assistant medical examiner Figeroa.

"His name is David Goldman, big-shot attorney, found in his home in Foxhall. He's a pretty big deal and no idea why anyone would shoot him. Shot from the front, through the chest. Nothing was stolen, no signs of forced entry. So looks like someone he knew. But he knew lots of people. Of course his associates aren't the type to kill anyone."

"Please give me your new wifi password and then leave me,” and they did.
Posted by Father Goof at 10:42 PM